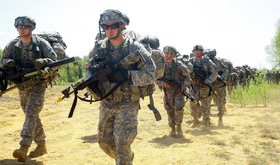 Soldiers from the 27th Infantry Brigade Combat Team training at Fort Drum in May to prepare for their deployment to Fort Polk this month.

SYRACUSE, NY (07/08/2016)(readMedia)-- More than 3,000 New York Army National Guard Soldiers will begin heading to Fort Polk, Louisiana this weekend-July 9 and 10-as they deploy for a three week exercise at the Army's Joint Readiness Training Center.

The Joint Readiness Training Center allows Army units to conduct combat training in a realistic environment which features a well-trained opposing force, civilian role-players on the battlefield, high-tech systems which monitor the action, and observer-controllers to evaluate unit actions.

The Soldiers are assigned to the 27th Infantry Brigade Combat Team which is headquartered in Syracuse, but has units in armories across the state ranging from Farmingdale on Long Island to Jamestown in western New York and from Binghamton to Ogdensburg on the St. Lawrence River.

"The Joint Readiness Training Center provides a world-class training experience that will allow our Soldiers to hone their skills and practice integrating the full spectrum of combat power ranging from infantry troops engaging in close combat with the enemy to artillery and air strikes," said Major General Anthony German, the Adjutant General of New York.

"While many of our Soldiers are veterans of the wars in Afghanistan and Iraq, they can still use the practice of fighting a high intensity conflict, and we have Soldiers who are new to our force and have not deployed," German added.

Another 2,300 Soldiers from other state Army National Guards, the Active Army, and the Army Reserve will also be part of the exercise.

New York National Guard units participating in the training are:

• The 1st Battalion, 69th Infantry, headquartered in New York City with companies in Farmingdale, and Camp Smith near Peekskill;

• The 2nd Battalion, 108th Infantry, headquartered in Utica, with elements in Geneseo, Ogdensburg, Saranac Lake, Glenville and Gloversville, and Morrisonville;

• The 1st Battalion, 258th Field Artillery, headquartered in Jamaica Queens with batteries in The Bronx and New Windsor;

• The 427th Brigade Support Battalion headquartered in Syracuse with companies in Rochester, Fort Drum and Buffalo;

• The 27th Brigade Special Troops Battalion headquartered in Syracuse with components in Buffalo, Lockport and Rochester. The unit provides "combat multipliers" to include combat engineers, communications, and military intelligence assets;

• A team from Detachment 1, Company B 3rd Battalion 126th Aviation, which flies CH-47 helicopters in Rochester;

• A detachment from the 204th Engineer Battalion in Binghamton;

• A platoon from the 105th Military Police Company in Buffalo;

Units participating which are not from the New York National Guard include:

• The 1st Battalion, 211th Aviation Battalion (Attack) a unit from the Utah National Guard, based in West Jordan, Utah, which flies the AH-64 Apache attack helicopter. Soldiers from Ohio, Maryland and Texas will also deploy with the battalion;

• The 1st Battalion, 182nd Infantry from the Massachusetts Army National Guard which is headquartered in Melrose with companies in Ayer, Braintree, Middleboro, and Dorchester Massachusetts, and Middletown, RI;

• A company from the 1st Battalion, 112th Infantry Regiment (Mechanized) a unit from the Pennsylvania National Guard based in Cambridge Springs, Pennsylvania, which operates the Stryker armored vehicle;

• The 812th Engineer Company from the Ohio Army National Guard based in Wooster, Ohio;

• A detachment from the Army's 519th Military Intelligence Battalion from Fort Bragg;

The 27th Infantry Brigade Combat Team has deployed to Afghanistan and Iraq multiple times in support of Operation Enduring Freedom and Operation Iraqi Freedom. Brigade Soldiers also responded to Superstorm Sandy in 2012 and Tropical Storms Irene and Lee in 2011.

The brigade was originally the New York Army National Guard's 27th Infantry Division which fought in Belgium with the British Army in World War I. The division mobilized again in World War II and fought in the Pacific at the battles of Makin, Saipan, and Okinawa.

The unit last deployed to the Joint Readiness Training Center in 2001.