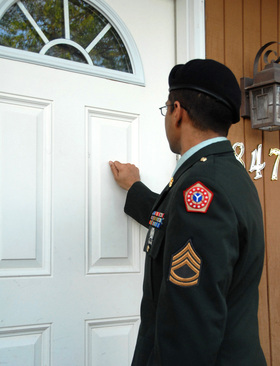 SPRINGFIELD, IL (05/24/2012)(readMedia)-- Every day servicemembers support each other in ways that may go unnoticed. Sometimes they are asked to do the unthinkable to help a fallen comrade and their surviving family members.

The heavy task is carried out by casualty notification officers (CNO) who have the emotional task of knocking on the door of the family to let them know their loved one was killed while serving their country. They absorb the initial emotion from the family prior to the casualty assistance officer (CAO) who helps the family make it through all the planning and struggles that follow.

Chief Warrant Officer (2) Mariah S. Peterson of Tallula, the casualty operations branch officer in charge with Joint Forces Headquarters in Springfield said this is one of the toughest, yet honorable, jobs a servicemember can do.

"It is a stressful, overwhelming, and emotionally-charged duty and if I can provide them the skills to be successful then I have done my job well," said Peterson, who is an instructor for the CAO/CNO program. "I have tremendous pride and respect for our CNOs and CAOs. This is not a duty servicemembers volunteer for, but when called upon there is no hesitation."

Chief Warrant Officer (3) Rachelle S. McKay of Taylorville with the 129th Regional Training Institute in Springfield acted as a CNO for two families and each encounter was different. She said she was anxious and nervous to see how the family would react upon meeting her for the first time.

"You don't know what their reactions are going to be," she said. "Every family reacts differently to grief."

McKay said it is never easy to prepare for that kind of tragedy and it was hard to watch someone go through the initial stages of grief.

"You see the pain they are going through and there is nothing you can do about it to make it better," she said.

Master Sgt. Rodney J. Sides of Sesser with 2nd Battalion, 130th Infantry Regiment in Marion, said CAO and CNOs must be aware of technology as it can make their jobs more difficult. He said one family he was supposed to notify found out their loved one was killed in the line of duty from the Internet before he had a chance to contact them.

Sides said notifying the family was difficult, but it helped that a fellow Soldier was a part of the family.

"Not on every occasion will a notification officer have the benefit of fellow Soldiers or difficulty of (the Internet) beating you to the situation," he said.

McKay said once she finished the notification of the families she replayed the scenario and frequently questioned herself if she did the job to the best of her ability.

The job can be traumatizing for some people, but she said she had friends and family to help her through it.

"It helps to talk to people, to talk out what happened and what you had to do," McKay said.

McKay said the highest honor a fellow Soldier can give a fallen comrade is to take care of his or her family.

"It's not something you want to do," she said. "However, in my mind, when I am tasked to do that I think to myself, 'how do I want my family to be treated if it's them going to my mom.'"

McKay said the experience has opened her eyes.

"I have really grown as a Soldier and as a person because of the two times I have done this," said McKay. "The families really can give back to you and it makes you realize what is important. You are giving the greatest honor to another Soldier and their family."

Sides said even though his situation was difficult, he still took pride in it. He said he had to maintain discipline and not close himself up.

"I was there to represent the unit, the (Illinois Army National Guard), the Soldiers and myself the best I could," he said.

Sgt. 1st Class Matthew A. Vocks of Taylorville, the casualty operations non commissioned officer in charge with Joint Forces Headquarters in Springfield, said a CAO assists a fallen servicemember's next-of-kin through all the paperwork whenever someone passes away. The CAO is also there to make sure the families get everything they are entitled to by law and regulation, said Vocks.

Sgt. 1st Class Jason, W. Newman of Robinson with the 631st Engineer Company in Lawrenceville said he hopes the Casualty Assistance Officer/Casualty Notification Officer program helps alleviate some of the stress families can experience as well help them better understand and receive all their benefits. Newman said he has experience being a CAO, but Soldiers are trained to do both.

"It is important for fellow Soldiers to be a CAO. Who better could understand the sacrifice the Soldier and family has made?" said Newman, who assisted three families and is still helping one military family.

Vocks said within the last year Illinois has assigned more than 10 CAOs for five Illinois casualties. He said if the primary or secondary next-of-kin reside in Illinois, they will be assigned a CAO and CNO, even if the casualty is not from Illinois.

Peterson said all active duty sergeant first class and higher, chief warrant officers (2) and higher and captains and higher have to complete the CAO/CNO program, which is a two-day course. The program currently has four training dates scheduled for Fiscal Year 2012 and must be renewed every 12 months.

Vocks said ranks are chosen because of experience, knowledge and maturity. He said it is much more difficult for a Soldier to help a senior-ranking member if they do not have enough experience to understand the circumstances.

"It is a level playing field," he said. "We are going to give them someone in their peer group."

Eventually the families started to trust him more, said Vocks, and this helped for ongoing situations. Sometimes you can still be taking care of the family a year later, he said.

"You have to set aside time," said Vocks. "There were Cub Scout meetings and basketball games and soccer games that I missed with my kids in order to take care of this family. You have to explain to your family what it is you were doing and why you were taking care of this other Soldier's family and ask your family to be patient in dealing with you."

Newman said he wondered if the families would accept him and if he would have the answers to their questions. He said after being a CAO he has a greater appreciation for his family, his children and everything most people take for granted.

"We owe it to the fallen Soldier and his or her family," said Newman. "Give them the same attention you wish your family would receive."

Vocks said the military gives families a binder of everything they need to do and points of contacts, but during such a difficult time they could easily miss extra benefits their Soldier earned. He said there are so many benefits the family might not know or understand even if they were all fully explained.

"We are the interpreter for that family," he said. "You never know when or how many will have to do it."

Vocks said many servicemembers do not think they could do the job of helping a fallen Soldiers' family.

"I would do it for their family so I fully expect them to do it for mine if they have gone through the training," Vocks said. "It's kind of a, 'treat your neighbor like you want to be treated' (situation)."

Peterson said these missions are never planned and all Soldiers need to be trained and ready just like every other job in the Army.

"Not every Soldier who attends our CNO/CAO training will be called upon," she said. "However, we (have to) give them the tools and resources to be successful and aid the families. It is our duty to take care of our fellow Soldiers and their families, (and) we will honor our fallen regardless of how they died."

Illinois has lost 248 servicemembers to the wars in Iraq and Afghanistan since 2001. 34 of those servicemembers were part of the Illinois National Guard, ranging in age from 19 to 59.

Photo 1: Photo submitted/ Casualty notification officers have the emotional task of knocking on the door of the family to let them their loved one was killed while serving their country. They absorb the initial emotion from the family prior to the casualty assistance officer who helps the family make it through all the planning and struggles that follow.