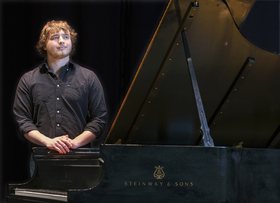 Pianist Christopher Davis '16 & '18 will be featured in the Grieg "Concerto for Piano" in the next Crane Symphony Orchestra concert at SUNY Potsdam's Crane School of Music on March 1.

POTSDAM, NY (02/20/2018) (readMedia)-- The Crane Symphony Orchestra at SUNY Potsdam's Crane School of Music will present four beloved classic works in its first concert of the spring semester, on Thursday, March 1 at 7:30 p.m., in the Helen M. Hosmer Concert Hall.

Directed by Dr. Ching-Chun Lai, the Crane Symphony Orchestra will open the performance with the "Romeo and Juliet Overture-Fantasy" by Piotr Ilyich Tchaikovsky.

The symphony will then present Edvard Grieg's "Concerto for Piano," featuring soloist Christopher Davis '16 & '18 (Croghan, N.Y.), the winner of the 2017 Crane Concerto Competition.

Davis competed against 22 other Crane students for the honor of performing the concerto with the symphony orchestra. It's a moment that he has been preparing for since his freshman year, when one of his friends and fellow piano students, Alyssa Filardo '14 & '15, won the competition. Davis clearly remembers the advice that their professor at the time, Paul Wyse, gave to Filardo as she prepared for the performance.

"He told us that you get to a certain point with music where you just have to transcend it. It's hard to describe, but it's just this otherworldliness. I really try to strive for that," Davis said.

Hard at work practicing the Grieg concerto, Davis said he really enjoys the piece because of its contrasts.

"The cadenza is just amazing, it's really a focal point," he said. "The concerto has a need for a clean virtuosic technique and musicality that makes it challenging."

The performance will be especially meaningful for the graduate student because the achievement would have meant a lot to his father, Robin Davis '82, who passed away in 2016 after a long illness. While his father was sick, Davis took to playing Frédéric Chopin's "Ballade No. 2 in F-Major."

"My dad would ask me to play that for him all the time. When my grandfather passed away, my dad asked me to play it at the funeral, but there was no piano, so I played it at home for family. Later, when my dad passed, I knew I had to play it at his funeral. It took on new meaning," Davis said.

His mother, Anne Davis '83, will be in attendance for her son's performance with the Crane Symphony Orchestra. Christopher's sister, Alexandra Davis '18, also attends SUNY Potsdam.

The concert will conclude with two balletic works by Igor Stravinsky, including "Circus Polka: For a Young Elephant" and "The Firebird Suite."

Christopher Davis '16 & '18 is a graduate student studying piano performance at The Crane School of Music, under the instruction of Dr. François Germain. He earned his Bachelor of Music degree with a concentration in piano pedagogy from Crane while studying under Dr. Paul Wyse and Dr. Sonia Wheaton Dudley. During his time at Crane, Davis has performed in several area recitals, and participated in a masterclass with David Jalbert. He has performed as a member of the Crane Symphony Orchestra, as well as the Crane Opera Orchestra and some piano trios. Davis has also worked as a rehearsal pianist for the Crane Opera Ensemble. He is anticipated to complete his Master of Music degree at the end of this semester.