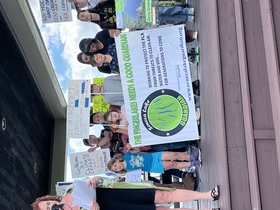 GENEVA, NY (06/27/2022) (readMedia)-- Cryptomining has become a flashpoint in recent weeks, as crypto crashes and Governor Hochul delays any decision around climate-killing cryptomining after accepting campaign donations from crypto billionaires and lobbyists.

In recent weeks, upstate GOP and democrat leaders joined together and called on Governor Hochul to curb cryptomining, scientists implored her to follow the science on climate (as she did with COVID), and winemakers urged her to protect their threatened industry.

Now, weeks after the moratorium passed the State Legislature and three days before the twice-delayed decision deadline for Greenidge Generation's air permits, and still no decisions around climate-killing cryptomining from Governor Hochul, the issue hit a fever pitch.

During the June 7 debate, Governor Hochul claimed that there is no connection between cryptocurrency industry donations to her campaign and her pending decision about the cryptomining moratorium bill. She said that she is reviewing the bill, and while still refusing to commit to signing the bill, she said: "We have to be very cautious about facilities going into former fossil fuel power plants...I am not interested in doing anything to harm the environment because I have the most ambitious climate law on the books."

Advocates demanded she take action to prove it.

"Governor Hochul's empty words do absolutely nothing to support the livelihoods under threat due to cryptomining. Rich out-of-state scam artists are getting even richer by invading our communities to destroy our natural resources, kneecap local businesses, and set us back in our fight against climate change. Governor Hochul: if you are actually committed to protecting the environment and upholding the nation-leading Climate Leadership and Community Protection Act as you say, and if you're actually not in the pocket of these wealthy fake speculators, sign the cryptomining moratorium bill and deny Greenidge Generation's air permits NOW!" said Yvonne Taylor, Vice President of Seneca Lake Guardian.

After being banned in China, outside speculators are flocking to New York to take advantage of a complete lack of regulations. New York now hosts a significant portion of the U.S.'s cryptomining, despite the economic risks associated with cryptomining and cryptocurrency, as advocacy groups Strong Economy for All and Action Center On Race and the Economy suggest.

The widely popular cryptomining moratorium bill will establish a two-year moratorium on new and renewed permits for proof-of-work cryptomining operations housed at fossil fuel-burning power plants. The bill will also require the Department of Environmental Conservation to perform a full environmental impact assessment in a year's time on cryptomining operations and how they affect New York's ability to meet the climate goals mandated in the Climate Leadership and Community Protection Act. However, it would not affect permit applications that have already been submitted or cryptomining plants that are already operating, of which there are many in New York, including Greenidge Generation.

Greenidge is the test case for cryptomining in New York.

Located on the shores of Seneca Lake, Greenidge operates over 17,000 Bitcoin mining machines and is expanding to over 32,500, with visible smokestacks pumping dirty fossil fuels into the air 24/7. This will lead to over 1 million tons of CO2 emissions each year, equal to that of 100,000 homes. Greenidge also sucks up to 139 million gallons of water each day from Seneca Lake and dumps it back in at up to 108 degrees. Gregory Boyer, director of SUNY's Great Lakes Research Consortium, has warned about Greenidge's potential to cause harmful algal blooms, which can be dangerous or fatal to humans and other animals in Seneca Lake, and make this water source for 100,000 people non-potable.

Greenidge's air permits are up for renewal by Governor Hochul and the DEC, who twice delayed the deadline to make a decision, now June 30. The DEC has consistently cited the need to sift through 4,000 public comments as part of the reason for this delay, but researchers from Cornell University FOILed for the comments, and found that 98% of the comments are opposed to Greenidge. In addition, more than 1,000 local businesses, organizations, winermakers, labor unions, and more have taken action against Greenidge because of the threats its air, water, and noise pollution pose to the local $3 billion, 60,000-employee agritourism economy.

Advocates warn that a renewal of Greenidge's air permits would signal to more outside speculators that New York is welcoming gas guzzling Bitcoin mining threats to local businesses and cancers on communities. Recently, Judge Robert A. Onofry affirmed in his decision regarding Danskammer Energy LLC, that Governor Hochul and the DEC have ample authority to deny Greenidge's permits under the nation-leading Climate Leadership and Community Protection Act.

The DEC has already confirmed that Greenidge is a threat to New York's energy goals as outlined in the state's Climate Leadership and Community Protection Act. In a recent story, "DEC Commissioner Basil Seggos told WSKG that he continues to have "significant concerns" whether Greenidge Generation's operations will be compliant with the state's statutory climate goals under the Climate Leadership and Community Protection Act, or CLCPA." Seggos later said, "Our belief still stands that this is a facility that's going to have an uphill battle complying with the law."

And at a Environmental Conservation budget hearing when asked about the potential impact of the escalating cryptocurrency mining activity in upstate NY on the states energy grid, the NYS Energy Research and Development Authority (NYSERDA) President Doreen Harris stated, "There could be a very significant impact on NY load resulting from cryptocurrency mining depending on the penetration of the resource."

"If Governor Hochul is truly not beholden to out-of-state crypto billionaires pouring money into her and her Lieutenant Governor's campaign, she will stand with New Yorkers by signing the cryptomining moratorium bill and denying Greenidge Generation's permit renewal. New Yorkers have made ourselves heard loud and clear: we don't want cryptomining. The legislature listened. Now it's up to Governor Hochul to protect the Finger Lakes and our $3 billion, 60,000-job agritourism economy, and the planet," said Abi Buddington, Town of Torrey Property Owner.

"For some reason, Governor Hochul has her priorities mixed up. On one hand we have a few hundred jobs across the state for watching over server farms and power plants, generating huge amounts of carbon dioxide and hot water emissions, versus the violation of the state's Climate Leadership and Community Protection Act and the most recent provision of the State's Constitution, while jeopardizing the welfare of the $3 billion, 60,000-job wine and tourist industry in the Finger Lakes," said Ken Camera, Geneva City Council.

"My county legislature took action a couple of weeks ago, passing a bipartisan, unanimous resolution that called on the governor and the DEC to sign the moratorium bill and deny the expired air permits at the Greenidge facility. Governor Hochul, we need you to protect us-all of us-when we yell out in unison that we will not let our lakes be exploited. We will not let dirty fossil fuel industries destroy our environment and our way of life," said Kyle Barnhart, Lodi Town Supervisor.

"For more than 20 years, thousands of New York citizens have led the way in educating about the threats of climate change, and worked with pioneering green businesses to develop the clean energy marketplace. But now those decades of hard-won emission reductions are being undermined for the sake of a speculative enterprise funneling profits to wealthy bitcoin investors while burning massive amounts of fossil fuel," said Gay Nicholson, President, Sustainable Finger Lakes.

Proof-of-work cryptocurrency is an extremely energy-intensive process that requires thousands of machines whirring 24/7 to solve complex equations. The more machines that are running, the faster a coin is mined. Each one of these machines requires energy to run, plus more energy to run cooling technology. Globally, proof-of-work Bitcoin mining uses the same amount of energy each day as the entire country of Argentina. It produces 30,700 metric tons of e-waste each year, comparable to the yearly IT equipment waste of the Netherlands.

More than 1,000 organizations, businesses, environmental activists, concerned residents, wine makers, elected officials, and more have taken action over the last year in opposition to Greenidge and crypto mining in New York State. NYC Comptroller Brad Lander sent a letter to NYS Leadership expressing strong support for a cryptomining moratorium. A letter sent to Governor Hochul in October was signed by more than 650 individuals and groups. In letters to Governor Cuomo last year opposing Greenidge Generation's expansion from an emergency peaker plant to a 24/7 Bitcoin mining operation, organizations, businesses, and Finger Lakes residents demanded Gov. Cuomo revoke Greenidge's grandfathered-in permits. And recently, several groups sent an open letter to Senators Gillibrand and Schumer urging them to visit the Finger Lakes and meet the residents and business owners whose livelihoods are suffering the environmental and economic consequences of Greenidge.

Advocates are also calling on Governor Hochul to put a moratorium on cryptomining through executive action. The Governor is well within her legal authority to act, according to a white paper from Columbia Law School Sabin Center for Climate Change Law: A Pause on Proof-Of-Work: The New York State Executive Branch's Authority to Enact a Moratorium on the Permitting of Consolidated Proof of Work Cryptocurrency Mining Facilities. The paper (summary of findings available here) draws on precedent established in 2010 when the executive branch signed the fracking moratorium. It finds the Governor has authority to stop new proof-of-work cryptomining operations by enacting a moratorium on the permitting of these facilities until a Generic Environmental Impact Statement (GEIS) to determine the full extent of the impacts of mining on communities is complete.

Cryptomining is at odds with the overwhelmingly popular amendment to the New York state constitution passed last year, which guarantees every New Yorker the right to clean air, clean water, and a healthful environment. Revitalizing old polluting power plants for private financial gain, with drastic consequences for our air, water and climate, all while causing huge amounts of noise pollution, is now unconstitutional - and ought to be treated as such.

Reform groups Common Cause/NY and NYPIRG have specifically criticized the crypto mining industry for exploiting public resources and straining the energy grid for private gain, and a group of federal lawmakers led by Senator Elizabeth Warren requested details from six major Bitcoin mining companies about their electricity usage and contributions to climate change. The NY League of Conservation voters sent a letter to Governor Hochul urging her to pause and regulate cryptomining, and 1199 SEIU recently announced their endorsement of a cryptomining moratorium. Earlier this year, President Biden issued an executive order requiring federal agencies study the legal, economic, and environmental impacts of cryptocurrencies, including Bitcoin mining.

Seneca Lake Guardian is a New York State Not-for-Profit Corporation with 501(c)(3) and is dedicated to preserving and protecting the health of the Finger Lakes, its residents and visitors, its rural community character, and its agricultural and tourist related businesses through public education, citizen participation, engagement with decision makers, and networking with like-minded organizations.