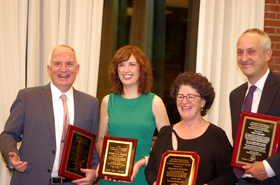 Two attorneys from The Legal Aid Society (LAS) were individually honored with a 2019 Jonathan E. Gradess Service of Justice Award for their unique contributions to NYSDA and the public defense community: John Schoeffel, a lawyer in the Criminal Defense Practice, Special Litigation and Training Units of The Legal Aid Society, and Peter Mitchell, LAS Director of Training, Criminal Division. NYSDA's Executive Director Susan Bryant noted that Mitchell and Schoeffel "are each, in their own right, deserving of the Service of Justice Award. But they are also deserving for their joint and intersecting contributions, as described on each of their plaques: 'For your generous sharing of your expertise with NYSDA and the public defense community through exceptional training presentations, reference materials, and practice resources.'"

Schoeffel brought to NYSDA's Annual Conference 10 years ago a proposal to revamp criminal procedure laws that left defense lawyers in the dark while trying to prepare their clients' cases. Discussion of reforming the discovery laws was not new then, but Schoeffel had drafted a whole new statute, Criminal Procedure Law article 245. This year, article 245-with some changes from Schoeffel's original draft and a lot of advocacy work by many, including Schoeffel himself and NYSDA-became law. And Schoeffel, along with Mitchell, presented Continuing Legal Education (CLE) training on the new law to the 350 lawyers attending the conference.

Mitchell's position at LAS would be daunting enough if meeting his in-house responsibilities were all that he did; the webpage about the Training Unit notes that LAS is the largest public defender organization in the nation. But Mitchell does much more, directing CLE events for not only LAS staff but other lawyers, and presenting frequently for NYSDA and other organizations. He was also active in the discovery reform movement.

Both Mitchell and Schoeffel have helped many public defense lawyers provide quality representation, which is NYSDA's mission. The award that they received is named for NYSDA's former Executive Director, Jonathan Gradess, who retired in 2017. It commends individuals or organizations that have provided outstanding support to public defense and to NYSDA.

In a serendipitous selection, NYSDA and the Genesee County Public Defender Office each presented an award to an outstanding lawyer from the Legal Aid Bureau of Buffalo, Inc. Claudia Schultz, Managing Attorney, Criminal Defense, at the Bureau, received NYSDA's 2019 Wilfred R. O'Connor Award. "Claudia is the consummate client-centered defender: she is creative, compassionate, and always looking for ways to inspire practitioners to provide broad-based, high-quality representation," said Stephanie Batcheller, Senior Staff Attorney at NYSDA. Schultz has been deeply involved in training not only at her current position but throughout her career, which began in Nassau County. She has served on the faculty for NYSDA's well-known Basic Trial Skills Program (BTSP). The award Schultz received is named for Wilfred R. O'Connor, a founding member of the Defenders Association and its president from 1978 to 1989. The award was established by NYSDA's Board of Directors to remember Bill and honor his sustained commitment to the client-centered representation of the poor.

Rebecca Town was awarded the 2019 Kevin M. Andersen Memorial Award, which is presented to a lawyer who has been in practice less than fifteen years. Town has accomplished much since she became a Staff Attorney at Buffalo Legal Aid in 2011. She has become "a top flight defense attorney," according Kevin M. Stadelmaier, the Chief Attorney of the Criminal Defense Unit in which Town works. In addition, Town has taken on with enthusiasm the training and mentoring of new attorneys, and is active in the community. She "has been at the forefront of efforts to educate the marginalized populations of the City of Buffalo on their rights and obligations in dealing with police," Stadelmaier wrote in nominating her for the award. And, with the Bureau's support, Town has also been involved statewide on bail reform, marijuana legalization, and other issues; for example, she worked with the Vera Institute and Buffalo's Partnership for Public Good to facilitate "a yearlong published study showing the wide racial and ethnic disparities in the use of bail," which was used in lobbying efforts, Stadelmaier added. The Kevin M. Andersen Memorial Award recognizes lawyers who exemplify "the sense of justice, determination, and compassion" that were the hallmarks of its namesake, a lifelong public defender.