East Peoria Soldier retires after more than 32 years of service 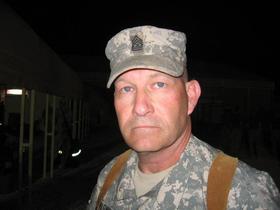 During his last assignment, he served as the operations sergeant major for the 65th Troop Command while also serving as the 65th's command sergeant major.

"I have only known Sergeant Major Wilfinger for about five years, but the day I met him I immediately recognized a level of familiarity with him that made me feel like I have known him for a lifetime," said Chief Warrant Officer (3) Tyler Penley of Sherman, Illinois, with Joint Force Headquarters in Springfield, Illinois.

Wilfinger, born in Shreveport, Louisiana, enlisted in the Illinois Army National Guard in 1982 as an infantry Soldier with Company B, 1st Battalion, 123rd Infantry in Delavan, Illinois.

"Being patriotic influenced my decision to join the military," said Wilfinger. "I was also going through tough times without a job and thought it was a good way to earn some money while serving my country."

The son of a pastor, Wilfinger lived in several states throughout his childhood.

"The military grounded me and caused me to mature," said Wilfinger. "I was a bit of a challenge as a young man and the military gave me a sense of purpose and provided me with the discipline I needed."

"He is a true noncommissioned officer," said Lt. Col. Charles Kitson of Springfield, Illinois, with the 65th Troop Command. "In our time working together, there was never any doubt that I could go to him. His actions only strengthened my belief in the noncommissioned officer corps. I was able to point to him as the example for others to follow."

Wilfinger said he has a great deal of satisfaction in his career and he would not change anything.

"I've met great people and Soldiers," said Wilfinger. "I've served with some of the finest and I envy the Soldiers who are just beginning their career."

Kitson said many Soldiers routinely stopped at his office to check in, due to the lasting impression Wilfinger left on his fellow Soldiers. Beauman reiterated Kitson's words.

"He was an amazing leader; he took care of his Soldiers and took a personal interest in those he worked with," said Beauman.

Wilfinger recalled many retired Soldiers who influenced his career the most and served as mentors during the last three decades.

Wilfinger echoes their advice to the Soldiers today.

"After 30 years of truly selfless service, Sergeant Major Wilfinger deserves to rest, ride and repeat at his leisure," said Penley. "We were lucky to have served with such an outstanding noncommissioned officer and I hope that we can all honor his legacy by propagating the values he so easily displayed."

Wilfinger has seen many changes in the military over the last 30 years and gives departing words to his troops and their future military careers.

"Never lose sight of what we are in this organization for," said Wilfinger. "That is to defend this nation and this state. Never take your oath lightly."

After retirement, Wilfinger said he and his wife, Bonnie, plan to travel, remodel their house and simply relax without working. Mountain biking is one hobby he plans to invest a great deal of time.

"They are the most important people in my life," said Wilfinger. "It is their love and support that helped me throughout my career."

Sgt. Maj. Vernon K. Wilfinger of East Peoria, Illinois, with the 65th Troop Command in Springfield, Illinois, retires this month after more than 32 years of service including 30 years as an active duty Soldier in the Illinois Army National Guard. (Courtesy photo)