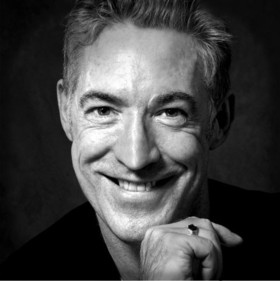 Composer Martin Hennessy, whose opera, ““A Letter to East 11th Street,” is the featured winner of the Domenic J. Pellicciotti Opera Composition Prize.

POTSDAM, NY (08/22/2013)(readMedia)-- The Crane School of Music at SUNY Potsdam is pleased to announce the winners of the first Domenic J. Pellicciotti Opera Composition Prize. Three operas were chosen from a pool of 74 submissions, which came from across the U.S. and Canada, as well as from Europe.

A prize of $10,000 and a full production will be awarded to the featured winner, "A Letter to East 11th Street," with music by Martin Hennessy and libretto by Mark Campbell.

"A Letter to East 11th Street" is an intimate opera that affirms, with wit and pathos, the enduring bonds of love, as it charts the impact of the AIDS epidemic on two best friends -- first in the early years of the disease and then 10 years later. In 1989, Rick Driscoll, a young man with AIDS, has returned to the suburban house in which he grew up and videotapes a letter to his best friend and former roommate, Susan. A decade later, Susan muses on all that has happened since Rick's death, and toasts her best friend.

Two $5,000 prizes and the production of an act or segment will also be awarded. The other winners include "In a Mirror, Darkly," with music by Christopher Weiss and a libretto by S. O'Duinn Magee, and "The Fox and the Pomegranate," with music by Matt Frey and libretto by Daniel J. Kushner.

"The Fox and the Pomegranate" takes place in a grove yielding many different fruits. A seductive and mysterious young man named Aril delivers a cryptic omen before seducing Nate, a gender-fluid individual, who has betrayed his lover, Meg. This allegorical opera explores the multifaceted nature of love, the fluidity of gender roles and the nuances of infidelity.

The Domenic J. Pellicciotti Opera Composition Prize was founded by Dr. Gary C. Jaquay to honor his life partner, Domenic J. Pellicciotti, an ardent fan of opera. The award seeks to encourage and acknowledge the creation of new opera works that explore, within a broad range of possible expressions and representations, themes related to tolerance, inclusion and/or the celebration of diversity within an inclusive community. Works that explore issues relevant to the LGBT community were particularly encouraged for this round. The $20,000 prize will be awarded every four years, along with a production of the winning operas.

Composer/pianist Martin Hennessy is best known as a composer for the voice, with a growing catalogue of art song, chamber music, opera and music theatre. He has received awards from ASCAP, Meet the Composer, the American Music Center and New Dramatists. His "Ben Jonson Songs" won Grand Prize at the San Francisco Song Festival, and he has been honored with Copland House and Millay Colony residencies, as well as two commissions from the Estate Project for Artists with AIDS. His music has been presented by Guggenheim Works and Process, American Opera Projects, Mirror Visions Ensemble, Harvard Ballet Company, Dancers Responding to AIDS, and New York City Opera's Vox Series. A native of Newtown, Penn., he now works and lives in New York City.

"A Letter to East 11th Street" librettist Mark Campbell was profiled in Opera News as one of 25 artists "poised ... to become major forces in opera in the coming decade." In his 10 years as a librettist, he has written nine operas and collaborated with a roster of contemporary notable composers. Campbell's most recent work, "Silent Night," which he wrote with composer Kevin Puts for the Minnesota Opera, received the 2012 Pulitzer Prize in Music. The opera has more than five productions scheduled in the next two years. Campbell's other successful operas include "Volpone," "Later the Same Evening," "Bastianello/Lucrezia" and "Rappahannock County."

"In a Mirror, Darkly" composer Christopher Weiss's music has been hailed by the New York Times as "wonderfully fluid [with a] cinematic grasp of mood and lighting." He has received commissions and performances from the Huntsville Symphony, Jacksonville Symphony, the Boston Chamber Orchestra, the Lancaster Symphony, the Washington Metropolitan Philharmonic, the Columbia Orchestra, the Curtis Symphony Orchestra, the Twickenham Music Festival and from Music from Angel Fire, where he was the Young Composer-in-Residence. Excerpts from "In a Mirror, Darkly" have been performed by the New York City Opera and the Virginia Arts Festival. Weiss has been in residence at Yaddo, the Brush Creek Foundation for the Arts and the Kimmel Harding Nelson Center. He holds degrees from Rollins College and the Curtis Institute of Music.

As a professor and publishing scholar, S. O'Duinn Magee was known as "Maggie Dunn." Upon retiring from academics to be a full-time writer, and while working with composer Christopher Weiss on their opera "In a Mirror, Darkly," she chose the professional pen name, S. O'Duinn Magee. Although not a musician by professional training, her musical interests and ability to read music, combined with a lifelong love of poetry and opera, convinced her to try her hand as a librettist. Magee's fiction-writing projects include a six-part series of literary mysteries and a five-part series of literary science fiction novels.

Matt Frey is a Brooklyn-based composer of contemporary concert music, both for vocal and instrumental ensembles. In 2013, selections from "The Fox and the Pomegranate" were selected for performance at Fort Worth Opera's inaugural Frontiers showcase. Frey's concert music has been heard in performances with the JACK String Quartet, the West Point Woodwind Quintet, the NYU Symphony Orchestra, the Manhattan Wind Ensemble, the Washington Square Winds, as well as at the 2012 Etchings Festival in Auvillar, France, and 2012 Duffy Festival in Norfolk, Va. A recent graduate of the master's program in music composition at New York University, Frey is also known as a new music producer, performer, conductor and advocate, through his activities as co-founder of the West 4th New Music Collective, a cooperative of New York City-based composers and performers.

Daniel J. Kushner is a Buffalo-born arts journalist and music critic whose work has been featured in such publications as Opera News, NewMusicBox, I Care If You Listen, the Huffington Post and Symphony magazine. His writings often focus on the contemporary classical music scene, as well as non-classical music and visual art. He trained as a tenor during his undergraduate studies, and he completed his Master of Arts degree at Syracuse University's S.I. Newhouse School of Public Communications. "The Fox and the Pomegranate" marks Kushner's debut as an opera librettist; the work was first workshopped at the 2012 John Duffy Composers Institute and was featured at Fort Worth Opera as part of its inaugural Frontiers showcase.

About the Crane Opera Ensemble: