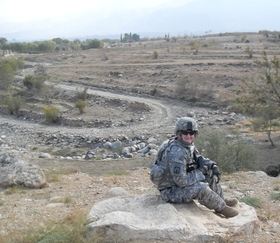 A retired Marine credits two Illinois National Guardsmen as heros for their immediate actions to help victims of a tornado that ripped through Washington, Ill., Nov. 17.

Retired Marine Staff Sgt. Karl Newman of Washington, Ill., said, Spc. Justin Brackeen of Washington, Ill., and Staff Sgt. Joshua Slocum of Roscoe, Ill. both with Company A. 1/178th Infantry Battalion out of Bartonville, Ill., used their military training to evaulate the situation and responded by administering first aid and getting victims to safety.

Both Soldiers were released from drill to check on Brackeen's property because of the storm and drove to Brackeen's neighborhood. When they arrived at Brackeen's apartment complex they discovered it was no longer standing.

"It was hard to tell where the streets were, it was nothing but rumble," said Brackeen. "It struck some chords in me knowing there could be people under the rubble."

Newman said the victims were looking to us for answers and help because they recognized the uniforms we were wearing.

"These two selfless Soldiers immediately responded to their community less than 10 minutes after the tornado passed," said Newman. "I personally witnessed and helped them dig elderly people out of rubble that were trapped beneath."

Newman said Staff Sgt. Slocum used his first aid kit to bandage an elderly man's bleeding head while Brackeen dug the man's wife and brother out of the rubble.

After stabilizing the three elderly victims, Newman said they heard cries for help from across the street. There they found a man stuck under debris with a broken leg and going into shock.

"The two Soliders and myself quickly found anything we could to keep him warm and protect him from the extreme elements," said Newman.

The Soldiers got the attention of the firefighters and called for a stretcher, said Newman.

"While the storm was hammering us with painful rain, hail, and extreme high winds the two Soldiers along with the fireman evacuated the four victims," said Newman.

Newman said he was separated from the Soldiers after about an hour, but continued to see them throughout the evening and the next day rendering aid, preventing looting and searching for survivors.

"It was terrifying digging through the rubble," said Slocum. "The main thing I was terrified of was finding any children beneath the rubble."

Slocum and Brackeen said their military training allowed them to keep a level head during this time.

"The main sound that caught my attention was the hissing sound of the gas lines," said Slocum. "It was extremely loud and was coming from every house."

Beside the threat of fire due the gas leaks, the group feared another tornado was coming and were urged by victims to leave and take cover, but they continued to help.

"You couldn't ask for anything more of their courage and willingness to put themselves in harm's way to help other people," said Newman. "It's beyond words and you can't put price on it."

Slocum said the best advice he could give to fellow guardsman who could be faced with similar situations is, "stay calm and be ready."

Photo 1: Pictured here is Staff Sgt. Joshua Slocum of Roscoe, Ill., with the A company 1/178th out of Bartonville, Ill. Slocum and Spc. Justin Brackeen of Washington, Ill., also with the 1/178th took immediate action to help victims of a tornado that ripped through Washington, Ill., Nov. 17.

Photo 2: Pictured here is Spc. Justin Brackeen of Washington,Ill., with the A company 1/178th out of Bartonville, Ill. Brackeen and Staff Sgt. Joshua Slocum of Roscoe, Ill., also with the 1/178th took immediate action to help victims of a tornado that ripped through Washington, Ill., Nov. 17.