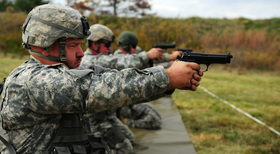 With the exception of two combined arms matches the team placed in the top 10 in every event. They placed 10th in machine gun team match; 4th in pistols and after four rifle events the team took 4th, 6th twice and 9th place. The team also place first in their shooting region, the first time in roughly four decades.

Every year the National Guard conducts statewide shooting competitions to identify its top shooters, said Sgt. Terry Pody of Machesney Park, a sniper team leader with Headquarters and Headquarters Company, 1st Battalion, 178th Infantry Regiment and the assistant state marksmanship program coordinator. These shooters advance to the regional where they compete against roughly five other states in their region.

After the regional tournaments, the teams trains in preparation for the WPW tournament, a nation-wide tournament open to all National Guard shooting teams throughout the United States. The tournament features the top shooters from every state and territory aiming for the same prize.

"We went to Arkansas to represent the state of Illinois against 48 other states and territories which made for almost 400 other shooters to compete against," said Pody.

Each member of the team goes to firing ranges on their own time to practice their skills outside of the annual rifle training with the Illinois National Guard, said Sgt. Jack Stout of Sterling, a member of the shooting team and a truck driver with the 1644th Transportation Company out of Rock Falls.

The Illinois National Guard team conducted two full days of marksmanship training prior to the event at the Silver Star Shooting Range in Barry. The team has competed in statewide and regional tournaments to prepare for the WPW tournament.

"We never get enough range time, and to get this kind of practice before the match was very beneficial," said Stout. "We spent a lot of time on the rifle and pistol ranges shooting at different distances we would see in the competition."

The team is comprised of Soldiers from three brigades in the Illinois National Guard. With the support of their units and the state-level command, the team was able to train and contend in the tournament, said Pody. With the competitive shooting team still growing they hope to attract more Soldiers and talent.

Marksmanship has always been a key Soldier skill, said Pody. With practice and dedication it can be honed to exceed the standard, he said. Competitive shooting is an Army-practiced sport, but unlike other Army sports it has a direct and viable application in a combat environment.

"In the history of wars, few enemies have been taken down by a football, Frisbee or golf ball. It has always been the task of a skilled marksman to eliminate an enemy threat from a distance," said Pody.