Glen Ellyn Soldier, Who Will Be Honored at Oct. 2 Bears Game, Has No Regrets After Being Mortared and Shot in Afghanistan Saving a Battle Buddy 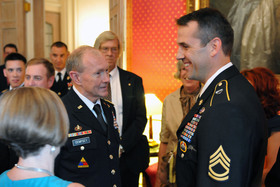 GLEN ELLYN, IL (09/29/2011)(readMedia)-- Many Illinois Army National Guard (ILARNG) servicemembers have seen firefights and explosions while deployed to Iraq and Afghanistan. For one Soldier and his team, hours of countless routines, training and scenarios helped save lives in 2009 amidst a long firefight in Afghanistan.

Sgt. 1st Class Ryan Ahern of Glen Ellyn, with the ILARNG's Company A, 2nd Battalion, 20th Special Forces Group (SFG) Airborne in Chicago received one of France's top military awards for his actions. On December 2009, on an Afghanistan hilltop, his unit came under attack while assisting their French counterparts.

"At first we were not certain if they were firing at us," said Ahern, an Army Special Forces Green Beret. "We were there to assist the French in their activities when we came under a mortar attack. Their attack was so far off we thought they were firing at forces in an adjacent valley."

As they were attacked, the Taliban were able to fire a mortar shot that wounded most of the team.

"As the attack happened I remember the mortar burst and getting hit with shrapnel," said Ahern. "The burst severely injured our team sergeant, throwing one of our officers nearly off the cliff and badly wounding other members with shrapnel."

Shrapnel hit Ahern in the calves, legs, shoulder and head but this did not stop him. His main concern was making certain his fellow Soldiers were safe and the French were not overrun.

"I noticed my team sergeant was down and not moving, so I jumped out of cover to grab him," Ahern said. "As I was recovering him, I was shot in the leg."

Although injured, Ahern said he realized he needed to act fast to help his battle buddies.

"I just knew I had to do something when I noticed I was pretty much the only one standing between the enemy and the team," said Ahern. "I grabbed the recoilless rifle and returned fire."

Ahern said he remembered returning fire for several hours as the medics used his body to shield the other Soldiers so they could receive medical assistance.

Ahern, a husband of 18 years and father of a 4-year-old daughter, put his life on the line to save the members of his team.

The firefight and details of the attack are lengthy. Because of the nature of their mission, Special Forces Soldiers are typically not allowed to talk about such heroics. However, this attack has received national attention because of the gallant actions of Ahern and his six-man team. They were there to assist the French allies that came under attack from Taliban and Al Qaida elements.

This assistance allowed the French to complete their mission without a loss of life and allowed them to extract the American troops back to safety.

"They were trying to get at the French operating in the valley," said Mississippi Army National Guard Capt. Thomas Harper, a fellow Special Forces Soldier. "We prevented that from happening, allowing them to conduct their mission."

Harper said this shows the strength and character of our Soldiers on the battlefield.

"It says a lot about our units and our dedication to duty and the training that we've undergone, as well as the maturity of our Soldiers," Harper said.

Because of the brave actions of their team, the Green Berets were recently awarded the Croix de la Valeur Militaire in a private ceremony at the French Ambassador's residence. The award is a close equivalent of the Army Silver Star.

"It's a great honor," said Ahern, a laser physicist in his civilian career who has spent four of the last 10 years deployed or recovering from combat-related injuries.

Created in 1956 by the French government to reward extraordinary deeds of bravery carried out as part of security and law enforcement operations, the Croix de la Valeur Militaire – or French Cross of Military Valor – is one of the most respected decorations in the French military.

"I am deeply honored to ... pay tribute to six most outstanding American Soldiers from the United States Army and the Army National Guard who distinguished themselves while fighting the Taliban and Al Qaida elements in Afghanistan," said French Ambassador François Delattre. "Through their outstanding bravery and engagement in combat, they fought at the risk of their own lives to assist French Soldiers, their brothers in arms, who experienced a barrage of fire from the enemy."

Ahern, who received two Purple Hearts during his 2009 deployment to Afghanistan, keeps in touch with his fellow Soldiers and has no plans of retiring anytime soon. The road to recovery has been long, but in the end, Ahern said he would do it all over again.

Ahern will be recognized for his heroic actions Oct. 2 during the Carolina Panthers and Chicago Bears football game at Soldier Field.

Photo 3: Photo courtesy of the Chicago Cubs/ Sgt. 1st Class Ryan Ahern of Glen Ellyn is honored during a Chicago Cubs/Milwaukee Brewers game June 14 at Wrigley Field in Chicago. Ahern received two Purple Hearts for his selfless service in 2009 while deployed to Afghanistan with the Illinois Army National Guard's Company A, 2nd Battalion, 20th Special Forces Group in Chicago. He was part of a Green Beret team that came under attack while assisting their French counterparts. Although injured, Ahern ensured his fellow Soldiers were safe and the French were not overrun by the enemy.