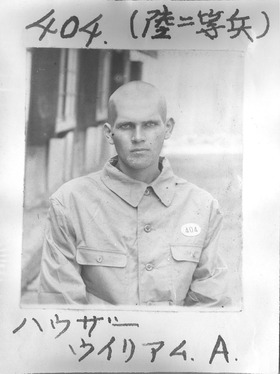 SPRINGFIELD, IL (09/19/2012)(readMedia)-- A persistent interest in a locked memorial garden, a promise to a friend and the quest for free computers led a couple of teachers at Proviso East High School in Maywood, Ill., to embark on a project that is today an expansive online databases of a single National Guard organization and a fascinating chronicle of one of the most dramatic prisoner of war episodes in American history.

Inside the well maintained, park-like memorial garden at Proviso East High School are several large commemorative plaques with the names of 191 former students who died fighting during World War II etched onto them.

Ian Smith, a former social studies teacher, and Jim Opolony, an English teacher at Proviso East, often talked of exploring the memorial garden, but found little opportunity until after school one day during the 1999 school year.

"The garden is an open air courtyard that classrooms overlooked and wasn't an area typically for students to go into and wander around in," said Smith. "The doors would lock automatically and we were worried we couldn't get back in. But one day we noticed the door was ajar and we went out to explore."

While they explored the memorial garden, Smith and Opolony made a rubbing of the name Robert Boerman from one of the monuments as a favor to Boerman's nephew. As they continued to explore they noticed a disproportionate number of names from the class of 1938.

"We knew Maywood had a long history with the Bataan Death March because of the parade, which was held for 50 years and the Bataan Day ceremonies," said Smith. "We wondered why there were so many from this particular class and thought it may be connected to Bataan."

The pair investigated further and discovered the building across the street from the school, visible from Smith's classroom, was the armory. Following on an oral history project they led with their students the year before, Smith and Opolony decided to get their students involved in the project of discovering and documenting the histories of the Proviso veterans who were memorialized in the garden.

As a bonus, the student's use of the Internet for the project would help the school procure computers through a school consortium. The teachers quickly found their students knew very little about their local history and the project was a great opportunity to educate them about it.

The original focus of the project was Company B, 192nd Tank Battalion, Illinois Army National Guard whose Soldiers, along with those of the rest of the battalion, would successfully repel the Japanese invasion of the Philippine's Bataan Peninsula for four months while critically short on food, bullets and other supplies. Without supplies or hope of reinforcements, the troops were ordered to surrender. Now prisoners of war, the Soldiers were made to walk the 80 miles to Camp O'Donnell suffering from dehydration, exhaustion, disease and brutal treatment at the hands of their Japanese guards.

"Originally the students got really upset," said Opolony. "We brought one of the Bataan survivors into the classroom and a student asked him 'did you want to die?' and he said 'every day.' They had tears in their eyes when they realized these men were really just boys of 17, 18, or 19 years old when this happened to them."

Opolony and Smith were successful at piquing their students' interest and said the project quickly grew wheels.

Both teachers said they could not imagine how the project would grow and develop.

"We were only going to document B Company, but as soon as we went online with the project we began receiving e-mails from family members from the remainder of the battalion in Wisconsin, Ohio and Kentucky," said Opolony.

They decided to move the project forward and expand it.

"We were getting information about all four companies in the battalion," said Smith. "We decided, let's keep going with it."

Today the entire project is a site of its own (http://www.proviso.k12.il.us/bataan%20web/index.htm) and is updated as often as new information is made available from survivors and family members.

"All of the information is from primary sources; first-hand accounts. Survivors sent us pictures and letters and scrap books," said Smith. "We went to the Maywood Bataan Day event in 1999 and looked for people who looked like they were World War II veterans and asked them to do interviews and that developed into great relationships."

As the nation marks POW/MIA Recognition Day Sept. 21, Smith and Opolony take pride in their students' efforts to preserve the history of the Illinois National Guard Soldiers who are connected to Bataan.

"The students really appreciated the history. It wasn't something in a history book, it was personalized," said Smith. "We'd have addresses of where the Soldiers lived and students would say 'that's next to my house.' It made the history come alive for them."

Both have found the project impacted their lives too.

"If you would have asked me in 1999, I wouldn't have known a whole lot," said Opolony. "I'm not an authority on Bataan or World War II, but I know a ton about the tank battalion. I've made a lot of friends and have traveled to all four towns where companies of the 192nd were from."

They said most of the survivors interviewed for the project were being asked to talk about something they would rather not remember, but that talking helped the survivors and helped their families.

"We were able to find out things, fill in the pieces for families who lost someone over there, but until (this project), we knew very few details about their experience before they died. Survivors would say to us 'thank you for helping me tell these stories I've never told anybody about before,'" said Smith.

Today only a few of the 192nd Tank Battalion Soldiers who served in WWII are still alive, but their stories and their memory live on as a result of the Proviso East High School Bataan Commemorative Research Project. The project has been a blessing to survivors and the families around the world and received two awards including an Illinois State Board of Education excellence award.

Smith and Opolony said the project has been a blessing on them personally as well.

"The privilege of being able to interact with and get to know these people...it has been as rewarding for Jim and I as it has been for the veterans and families who've benefitted from the project," said Smith.