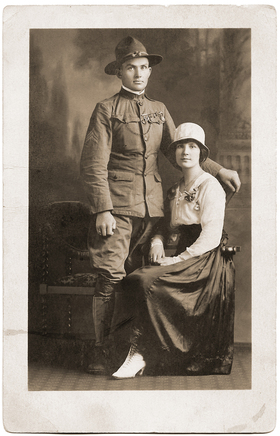 SPRINGFIELD, IL (04/12/2011)(readMedia)-- Roughly 15 years after the Spanish-American War, the United States was involved in another conflict. This one was on a much larger scale and changed again what people knew of war. American Soldiers lived in trenches, fighting German and Austrian Soldiers and stayed on the lookout for gas attacks and ambushes. With America involved for only a year, it will always be remembered by the nation as the Great War.

The Illinois State Military Museum held a WWI event in March with another scheduled for November so members of the community may learn about and honor the Illinois Soldiers who served in the war. One of the highlights of the WWI event was a re-enactment of the events at Consenvoye, France, which earned Illinois National Guard 1st Sgt. Johannes S. Anderson the Medal of Honor.

After nearly a century, the actions of one man in WWI are still remembered by historians and veterans alike as an example of valor in battle. While little is known about Anderson's childhood and youth, it was his life in the military and his actions in the war that are best known. April 3 marked 61 years since Anderson's passing, but not the death of his legacy.

Anderson, originally from Finland, entered service in Chicago. He was assigned to Company B, 132nd Infantry, 33rd Division with the Illinois Army National Guard during WWI.

His citation for the Medal of Honor reads, "While his company was being held up by intense artillery and machinegun fire, First Sergeant Anderson, without aid, voluntarily left the company and worked his way to the rear of the (machinegun) nest that was offering the most stubborn resistance. His advance was made through an open area and under constant hostile fire, but the mission was successfully accomplished, and he not only silenced the gun and captured it, but also brought back with him 23 prisoners."

Anderson's actions saved lives while putting his own at risk. He was one of nine Illinois National Guard Soldiers to be awarded the Medal of Honor during WWI.

His children grew up knowing of their father's heroic deeds, but rarely heard his war stories.

Anderson's son, Karl Anderson said he knew his father as good and hard working man. He said his father spoke little of the war and of Consenvoye. Karl said his father was modest about his military actions that earned him the Medal of Honor.

From some of the stories Anderson told his children, historians were able to piece together more of Anderson's legacy to document and to reenact the events at Consenvoye, said Lt. Col. Mark Whitlock of Springfield, the director of the Illinois State Military Museum.

"As we were doing choreography to develop the scene, where he is on the battlefield and he rushes out of the trenches and he comes around behind the (Austrians) to capture them, we figured he probably fired some shots, and it was a little bit of a mini skirmish," said Whitlock. "When his family arrived they explained to us that he didn't fire a shot."

The descendants of Anderson still carry on his story and have taken steps for it to be remembered by generations, said Whitlock. The family has donated artifacts to the museum Anderson had or received throughout his tour and life including awards decorations and souvenirs from the war.

"The Johannes Anderson family donated, initially, the Medal of Honor that he was awarded for his actions in World War I," said Whitlock. "With that Medal of Honor they also provided his citation and other awards associated with his military service. That was the initial donation, we were very happy to receive that, but then during the event we were pleased that the family arrived with other items such as the flag that was draped on his coffin at his funeral, and the bayonet that he took from one of the Austrian Soldiers that he captured during the events wherein he earned the medal."

A display of Anderson's medals, including his Medal of Honor, his personal diaries, and various other personal effects were donated to the museum by his surviving family and are on display.

Nancy Dummer of Oak Park, Anderson's granddaughter, said the family donated the Medal of Honor to share their family's treasure with the public.

"I just thought it was something that would be more valued here," said Dummer. "We knew a museum

such as this would take care of it and would treasure it."

Anderson was one of many heroes that served in the Illinois National Guard or Militia who received the medal for valor on the battlefield. His medal among many other artifacts can be seen at the Illinois State Military Museum in Springfield.