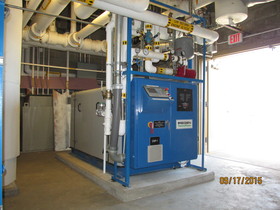 The new innovative CHP system is projected to save $60,000 a year.

AUGUSTA, ME (01/09/2017)(readMedia)-- The Maine Army National Guard earned a 2016 ENERGY STAR CHP Award for a 75 kW natural gas-fired combined heat and power (CHP) system, otherwise known as cogeneration, located in Bangor, Maine. The award was presented in New York at the NYSERDA Conference on December 7.

Through the recovery of otherwise-wasted heat to produce hot water for the Army Aviation Support Facility (AASF), MEARNG has demonstrated exceptional leadership in energy use and management. With an operating efficiency of 73 percent, the CHP system requires approximately 32 percent less fuel than a typical energy-supply system with similar output.

Based on this comparison, the CHP system avoids nearly 100 metric tons per year of CO2 emissions, reduced electrical cost by $30,000 and by capturing the waste heat saved just under $30,000 in fuel savings. Moreover, by generating electricity on site and displacing grid-supplied power, the CHP system increases the reliability of the facility's energy supply.

The Maine Army National Guard will host a media tour of their award winning heating system which may be used as a prototype for future National Guard buildings across the Nation. The tour will be held at the Army Aviation Support Facility in Bangor on Thursday January 12th at 11 a.m.