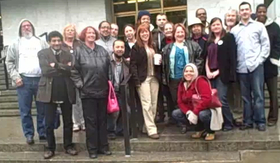 Attendees of meeting with Assemblyman Ortiz for Sunset of Kendra's Law

ROCKVILLE CENTRE, NY (05/24/2010)(readMedia)-- We represent more than 25 groups and organizations representing thousands of people and hundreds of individuals who seek sunset, abolition of Kendra's Law and oppose permanence and oppose extension of Involuntary Outpatient Treatment in New York State.

www.NoIOC.org to see growing list of individual or organizational supporters

· If extended, External Advocates to complement often ineffective public defenders must be available to all people being petitioned.

· AOT does not have any different outcomes than voluntary intensive services according to the New York State Assisted Outpatient Treatment Program Evaluation of June 30, 2009 when in use for 6 months – see Executive Summary under findings.

· AOT is disproportionately used in New York City. There is no reason to think residents of NYC are different than residents of the rest of New York State so the logical conclusion is it is only used more often in NYC thus depriving NYC residents of civil liberties because it is easier to use there, not because it makes more sense. NYC also uses less voluntary agreements than the rest of the state where voluntary agreements are usually tried first before court ordered AOT- also from the Findings Section of the Executive Summary.

· AOT is disproportionately used on African Americans and Latinos. The executive summary says the reasons for this difference are 'beyond its purview' other than generalizing about African American's socio-economic status and use of the public system with no data to back up these stereotypes. There is no escaping the fact that the use of AOT in NYC is racist in its effect.

· AOT is not used much more often on people who are being discharged from the hospital than as a 'preventative measure' thus belying the original claims and intent of what was called "Kendra's Law" after someone who was killed by someone seeking services that did not receive them and was not hospitalized. Thus, the entire rationalization for depriving citizens of New York State with psychiatric labels is false and based on fear mongering rather than on the reality of the implementation of this program.

· AOT takes away the individual decision making power of citizens who have committed no crime about their choice to treat, not treat or how to treat what is considered by many to be a medical condition. There are many medical conditions that put people themselves and other citizens at risk but none of these lead to forced treatment thus AOT discriminates on the basis of perceived disability, a violation of the Americans With Disabilities Act. Examples are people with diabetes who do not treat their illness and are dangerous behind the wheel of a car as well as at risk for kidney failure, blindness and loss of limbs, people with epilepsy in danger of brain damage and also behind the wheel of a car, people with heart and blood pressure conditions, a risk to themselves and others (when driving) to the point of death by heart attack or stroke.

· AOT takes one group of citizens and singles them out for lesser rights as American Citizens than any other group on the pretext of paternalistic beneficence. There is no escaping the fact that this is discrimination pure and simple based on ignorance and prejudice.

· AOT costs much more money than voluntary treatment, no treatment or alternatives to traditional treatment and according to the Evaluation has led to lack of services for citizens who seek voluntary treatment in the public system. In what other field of "medicine" would the unwilling go to the front of the line and those seeking care go to the back? Motivated people are much more likely to benefit from services than those who do not seek nor want them. This is both economically and logically an absurd use of limited state resources.

· AOT does not work to prevent violence or arrest. See Kisely S. Cambell LA, Preston N. Compulsory community and involuntary outpatient treatment for people with severe mental disorders. The Cochrane Database of Systematic Review 2005, Issue3 Art. No. CD004408 pub2 DOI: 10 1002/14651858 CD004408 pub2 This study found little beneficial effect. "In terms of numbers needed to treat, it would take 85 OPC orders to prevent one readmission, 27 to prevent one episode of homelessness and 238 to prevent one arrest.

· AOT promotes prejudice, undermines confidence and sense of self determination, takes away civil rights from several groups historically victims of prejudice and discriminatory laws people called "mentally ill" by society and African Americans and Hispanics and others.

· AOT is an ineffective use of New York State's limited economic resources, is prejudicial and discriminatory in its use, does not do what it purports to do and performs no better than voluntary services. "Kendra's Law" or AOT should be allowed to sunset in 2010.

Kendra's Law" which exhibits structural and institutional racism and classism was suppose to sunset in June 2010 - and the new proposed law is even more social control than its previous version.

The proposed new law includes provisions such as increasing the original court order from 6 months to one year; not requiring doctor testimony, requiring fiscal management, allowing an expired order to be renewed 60 days after it expires without needing a new hearing, and viewing "non-compliance" with drugs, urine or blood tests, or drugs and alcohol use as grounds for "dangerousness".

Hundreds of millions of tax-payer dollars have been spent on Kendra's Law legislation, which was first enacted in 1999 after a young woman - Kendra Webdale - died when struck by a train after being pushed off a subway platform by Andrew Goldstein. The law allowed for people who were accused of "mental illness" but not considered a present danger to be court ordered to receive outpatient drug treatment. Andrew Goldstein was an individual who had been institutionalized and drugged. After he was released from lock-up he sought voluntary outpatient treatment. However, he was repeatedly turned away by "mental health" treatment providers. He received no compassion, - no support, - no services, - not even the medications he was accustomed to and was willing to take. He was refused help- and then pushed Kendra Webdale - and then got attention. He would not even have qualified or been subject to the law named after his victim. This law is just an attempt to draw attention away from the real problem, which is lack of real help and assistance from providers, and a knee-jerk response of social control and blaming the victim.

WE THE PEOPLE are survivors and escapees of the current treatment methods of organized psychiatry. WE THE PEOPLE maintain that too many people have been victimized by experimentation, drugging, and electro-convulsive "therapy". They continue to state national statistics that people who have been treated as "mentally ill" die an average of 25 to 30 years younger than their contemporaries.

WE THE PEOPLE view the "mental illness industry" as cruel, costly, powerful, and profitable. As citizens of the United States we maintain that the human rights of ALL people must be protected and promoted. When the needs of people are met, force is not necessary. Forced drugging and unwanted "treatment" is torture. We will be heard.