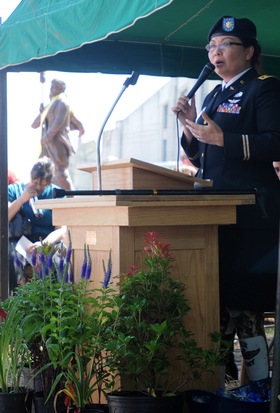 "I am proud that America now finally realizes that her daughters are just as capable of fighting for liberty and freedom as her sons," said Duckworth.

In 2004, while co-piloting a UH-60 Blackhawk helicopter, Duckworth's aircraft was hit by a rocket propelled grenade fired by Iraqi insurgents. The explosion resulted in the loss of both her legs and extensive damage to her right arm. In 2006, the governor appointed her director of Illinois Department of Veteran Affairs, and in 2009 President Obama appointed her to serve as the Department of Veterans Affairs Assistant Secretary for Public and Intergovernmental Affairs in Washington, D.C.

Many people were on hand for the ceremony, including Congressman John Shimkus of the 19th Congressional District, numerous spectators, and a large contingent from the DAR, of which Duckworth is a member.

"I appreciate the fact that the state of Illinois (has) recognized women's service to the military," said Army Lt. Col. Natalie Northern, commander of the 633rd Theatre Gateway Personnel Accountability Team and a Springfield resident. Northern was deployed to Iraq the same time as Duckworth.

The ceremony was preceded by a parade that led to the Brehm Memorial Library, the site chosen by the DAR to house the veterans' memorial.

The memorial stands as a reminder of both the challenges faced and the strides women have made in the military.

"Women are rarely recognized, and as a woman, it's nice to be recognized," said Hallie Scott of Woodlawn. "It's nice that something big like this happens, (and) a big crowd from all over Illinois came here for people who are fighting for our country."