Career on the Bench Spanned More than 33 Years, 3,000 opinions 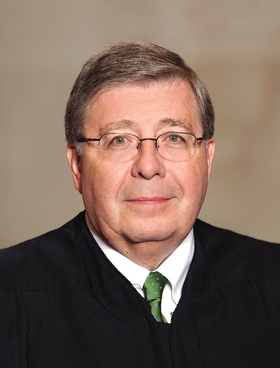 ALBANY -- Justice Thomas E. Mercure, the longest serving appellate court judge in the history of the Third Department, will retire from the bench on March 1, 2014.

Justice Mercure served as an associate justice on the Appellate Division, Third Department, of state Supreme Court for more than 25 years, and has been a state Supreme Court Justice for more than 32 years. The Third Department encompasses 28 counties in the three judicial districts from the Canadian border to the lower Catskills and from the Vermont and Massachusetts borders to the Finger Lakes.

Justice Mercure was the senior associate justice on the Appellate Division until last year when he was asked to assume the responsibilities of Administrative Judge of the Third Judicial District, overseeing courts in seven counties, 53 judges and more than 400 employees.

He was invited to sit on the state's highest court, the Court of Appeals, in 1994 and 2011 for two cases, including one related to the World Trade Center bombing in 1994.

"It has been a great privilege to have served the public through the law for more than four decades," Justice Mercure said. "The work has been endlessly fascinating, and I have had the great pleasure to work each day with brilliant, dedicated colleagues, both on the bench and in the administrative office of the court system. I am grateful for the tremendous support that I always received from staff, associates and law clerks. I am looking forward to new challenges in the years ahead."

Justice Mercure planned to retire at the end of 2013, having reached the age of 70, but agreed to stay on for two months and was certified by the Administrative Board of the Courts, to allow for a smooth transition. Justice Mercure said he now plans to continue to work in the legal field or teach.

As the senior associate justice on the Appellate Division of the Supreme Court, Third Judicial Department, Justice Mercure heard more than 21,000 appeals cases, and wrote more than 3,000 signed opinions.

"Justice Mercure has been a tremendous asset, both on the bench and in the administration of the court system," said Chief Administrative Judge A. Gail Prudenti. "We thank him for a lifetime of dedicated and principled service."

The Commission on Judicial Nominations deemed Justice Mercure "well-qualified" for a seat on the state Court of Appeals and nominated him to join the state's highest court in 2006 and 2007.

Justice Mercure spent more than a decade as a member of the Ethics Commission for the Unified Court System, including seven years as chairman, where he worked to ensure all full-time judges and high-level court officials across the state abided by strict ethical standards.

In 1991, he was named to the Committee on Pattern Jury Instructions and was one of several Supreme Court Justices tasked with developing jury instructions for use in all civil trials across the state.

Having earned an exceptional reputation as a jurist over the years, Justice Mercure was invited in 2003 to join the New York State Federal-State Judicial Council as one of five state judges meeting regularly with five federal judges to help facilitate dispositions of cases that might involve either court system. That same year, he was also asked to sit as a member of the Advisory Committee on Judicial Ethics. Both are posts he has held for a decade.

Justice Mercure and his wife, Terry, live in Hudson Falls. They have five children and 11 grandchildren.