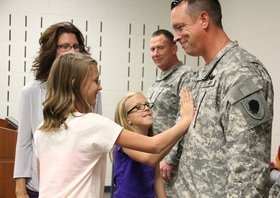 "This promotion is humbling, I am grateful for this opportunity and for my leadership's faith in my abilities," said Pulcher. "I have a lot to learn."

Pulcher completed two tours in Afghanistan as the Air operations officer with Joint Force Headquarters in 2009 and as commander of Company B, 2-238th General Support Aviation Battalion in 2013.

Pulcher enlisted in the Illinois National Guard in 1992 before he received his commission through the Reserve Officers' Training Corps program in May 1996. He has held many positions in his career including platoon leader, flight-training commander, training manager, executive officer, facility commander and many more including his newest assignment as the state Army aviation officer. He has attended several military courses including aviation maintenance manager, total Army instructor training, UH-60 Blackhawk Instructor pilot course and combined arms exercise to name a few.

"What a great accomplishment, very few percent of those who put on this uniform make it to that rank, congratulations," said Brig. Gen. Richard Hayes, Illinois National Guard Deputy Adjutant General and Director of the Joint Staff.