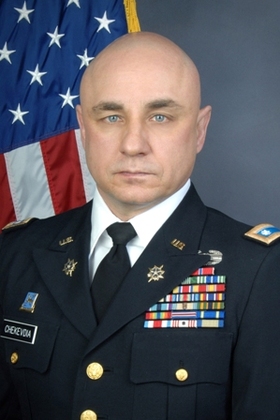 As the son of a World War II veteran, Chekevdia said he felt the proverbial call-to-duty at a young age.

"I grew up around World War II veterans," said Chekevdia. "I even had the pleasure of knowing a World War I veteran. There was never a question about me joining; I just didn't know how long I would stay."

Chekevdia said he decided to join the Illinois Army National Guard because of the patriotism instilled in him by his father, but his strong ties to his community motivated him to join the 3rd Battalion, 130th Infantry Regiment in West Frankfort in 1982.

"I chose that unit not so much to be an infantryman, but because it was the unit closest to my home and therefore in my community," said Chekevdia.

Six years after he enlisted he was commissioned as an officer.

During his career Chekevdia has been on tours in Poland, Ukraine, Russia and Iraq, but said his mission in Honduras was his most memorable.

"I took a platoon of infantrymen from Company A, 3rd Battalion, 130th Infantry in Mount Vernon to Honduras and lead them and Honduran Soldiers on training missions in the hills and jungles in 1990," said Chekevdia. "We were short on lieutenants, so I volunteered to fill the shortage."

Although at the time he was a second lieutenant with very little experience as an officer, he said the skills he attained as an infantryman provided him with the skills necessary to lead his troops on numerous successful missions.

Brig. Gen. Steven Huber of Chicago, the Land Forces Component Commander for the Illinois National Guard, said he spent a lot of time with Chekevdia reviewing missions during Chekevdia's 2003 to 2004 deployment to Iraq.

"Lt. Col. Chekevdia's best leadership trait is his compassion and caring leadership style," said Huber. "He is genuinely concerned for others around him, for his Soldiers and for the mission."

Chekevdia's successful missions both abroad and stateside have resulted in multiple accolades, including the Bronze Star Medal.

When Chekevdia was not leading troops through adverse terrains in both the jungle and the desert, he spent his time working as a corrections officer for the Illinois Department of Corrections at Big Muddy Correctional Center in Ina where he has worked since 1995.

Now that Chekevdia is retiring from the Illinois National Guard he said he plans on spending more time with his family.

"My father passed away just after I was commissioned," said Chekevdia. "I was a major when my mother passed. Today, my uncle and aunt, George and Marlene Stravroulakis, and my niece and nephew, Ginger and Dan Vreeland, are my primary supporters. I am a single parent of a 9-year-old boy, Rick, and without these family members, I would have had to leave the service three years ago."

Chekevdia said he will never forget how his time in the National Guard has influenced his life.