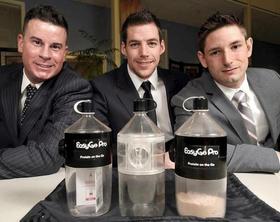 SPRINGFIELD, IL (03/27/2012)(readMedia)-- After multiple overseas deployments, three Illinois Army National Guardsmen came together to build a product that benefits both Soldiers and babies. Having no prior business experience, the Soldiers used educational resources to create the EasyGo dispenser.

"Being a Soldier and small business owner shows you the complexity and depth the Guard has to offer," said business co-founder Staff Sgt. Michael Pett of Chicago, with Recruiting and Retention Command. "Not only am I able to continue my service to the country, but can fulfill my dream of being a business owner."

The Soldiers signed up for a program through the University of Illinois-Urbana Champaign called Illinois' Launch. Through the program, they attended small business workshops and seminars and made several connections to help them along the way, said Pett.

"We are not engineers, graphic designers, nor can we draw a family of stick figures between the three of us," said Staff Sgt. Blake Schroedter of Newton, with Troop A, 2nd Squadron, 106th Cavalry Regiment in Pontiac. "We are a group of common guys, but visionaries who saw an issue and decided to fix it."

While deployed, Schroedter said he and other Soldiers had many frustrations with making an instant protein shake, a common source of nutrition for combat Soldiers. They tried cutting the tops off water bottles to make a funnel and used Ziploc bags and Tupperware for storage. What they needed was something portable and convenient to store, carry and dispense a pre-measured amount of protein powder.

After returning home from deployment, Schroedter along with Pett and Staff Sgt. Tony Genovese of Naperville, with Troop C, 2nd Squadron, 106th Cavalry Regiment in Aurora developed a prototype that evolved into the EasyGo Dispenser product lines.

"The evolution of the prototype lasted over a year with countless hours of phone conferences with our director of manufacturing, ensuring we accomplished our goals," said Schroedter. "I am excited for the day when I am at an airport or gym and I see a complete stranger utilizing our product."

After the initial prototype for the protein powder was created, the Soldiers developed a second dispenser to accommodate baby formula powder.

"Currently there are no military programs that promote entrepreneurship for Guardsmen that we are aware of," said Genovese. "One of our major long-term business goals is to create a program designed to aid military personnel in ventures similar to ours."

The Department of Defense launched a few programs that help disabled veterans and families of the wounded and fallen start businesses, but nothing specific for Guardsmen.

The Soldiers boast a young start-up company that offers a product durable enough for Soldiers to use on missions during war and gentle enough for parents to use for their babies at home.. The product was launched March 11 in Chicago. The first shipment of EasyGo PRO and Baby dispensers is due to arrive in August. For more information please visit http://easygodispenser.com/.