VIDEO: AG James + Let NY Vote Rally to Get Out the Early Vote!

Grassroot advocates, unions, and advocacy groups join together to promote the first year of early voting 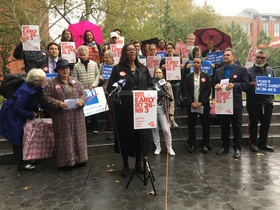 NEW YORK, NY (10/22/2019) (readMedia)-- Today, Attorney General Letitia James and the Let NY Vote Coalition joined together for a rally for Get Out the Early Vote for the first time in New York State.

The new law gives voters 9 days before Election Day to vote, beginning October 26 and ending on November 3rd. Voters must vote at their assigned poll site, which they can find here. Voters can still cast their ballots on Election Day on November 5 at their regular poll site.

Find more information about where and when to vote at: www.voteearlyny.org

"Early voting is a gamechanger for New Yorkers who no longer have to choose between getting to work on time or exercising their democratic rights. We hope every New York voter will join us and vote early!" said Susan Lerner, Executive Director of Common Cause/NY and co-founder of Let NY Vote.

"Voting is one of our most basic democratic rights and we must do everything in our power to expand and protect this right," said Attorney General Letitia James. "Early voting is a commonsense measure that will provide greater accessibility and convenience to New Yorkers across the state and ensure they have ample time to cast their ballot and make their voices heard. I urge all New Yorkers to take advantage of this early voting period and I thank the Let NY Vote Coalition for their work to make this important measure a reality."

"Early Voting has finally come to New York, and now our elections can better meet the needs of busy New Yorkers. With the flexibility to vote at different times on nine separate days - including four weekend days - comes renewed opportunities for civic participation and engagement. I invite all registered New Yorkers to make history by voting early on whatever day works best for them. The de Blasio administration is proud to have been a part of the coalition that helped move this legislation forward and is excited to kick off early voting in New York," said Rini Fonseca-Sabune, Chief Democracy Officer.

Members of the Let NY Vote Coalition, such as the NAACP and the New York Immigration Coalition, have been spreading the word about Early Voting throughout New York City for weeks. The coalition provided over 120 orders for materials which partners and activists plan to distribute to 38 counties across the state about Early Voting. All libraries across the five boroughs have information about early voting.

This campaign has been supported by the generosity of the Patti and Everett B. Birch Foundation, honoring the legacy of Mrs. Birch, a lifelong supporter of strengthening our democratic institutions. Order Design largely donated their time and talent to the posters, social media, etc.

"Far too long people who've been incarcerated or have had criminal justice involvement has been disenfranchised and left out of the decision making process. Let's make sure they are also included, educated and motivated to vote early," said V. Pate NYStatewide Organizer Halt Solitary Campaign.

"We applaud the State legislature and governor for passing this important reform, and the mayor for funding early voting in the city budget. Anything that makes voting easier strengthens the democratic process. This is especially important in New York, which is consistently ranked as one of the worst states for voter turnout. We encourage New Yorkers to take advantage of the additional voting time and we urge the Board of Elections to ensure all goes smoothly, so that we are well-prepared for next year's elections which will surely see higher turnout," said Betsy Gotbaum, Executive Director of Citizens Union.

"This Saturday, for the first time, New Yorkers will be able to cast their ballots at polling places before Election Day, making participation in our democracy simpler and more fair. Work and family obligations, long commutes, and unreliable public transportation are just a few of the obstacles that have blocked access to the ballot for too many New Yorkers for far too long, particularly for low-income voters, voters of color, and naturalized citizen voters. Because voting is the right we exercise to protect all others, early voting means all of our rights are better protected," said Perry Grossman, Senior Staff Attorney in the Voting Rights Project at the New York Civil Liberties Union.

"Early Voting is good for voters. It means anyone can fit voting into their life-for the first time, New Yorkers will have 9 days, including early mornings, late nights and weekends, when they can vote-rather than trying to fit their life into a single Election Day. That helps voters with jobs, families, personal and professional commitments: in other words, our neighbors, our families, ourselves. We're excited for our first Early Voting period in 2019 and look forward to it being even better and more robust in 2020," said Jan Combopiano, Executive Committee, Brooklyn Voters Alliance.

"Anything we do to ensure that we are increasing voter turnout in this country makes a huge difference in keeping our democracy alive and well," said Zoe Siegel, Executive Director at Why Tuesday?

"Order couldn't have been more excited to participate in the Vote Early NY campaign. We believe strongly in the power of design to make change in the world, and this particular campaign is just one example of how it can be done. As resident New Yorkers ourselves, we're honored to help increase voting across the state," said Jesse Reed, Partner at Order.

Early Voting is just one of the many victories the Let NY Vote coalition had this legislative session consolidation of primaries as well as pre-registration of 16 and 17 year olds.

Let NY Vote's list of wins in the 2019 legislative session: