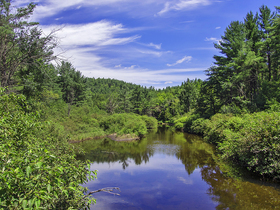 North Branch of the Boquet River in Lewis, NY - to be added to the Adirondack Forest Preserve. (Photo: Carl Heilman)

LEWIS, NY (09/25/2013)(readMedia)-- The proposed Adirondack Land Swap - Proposition 5 on New York's statewide ballot this Election Day - has been endorsed by two key news media outlets in the Adirondack Region for benefitting the region's environment and economy at no cost to taxpayers.

The Adirondack Explorer news magazine, which bills itself as being "devoted to protection and enjoyment of the Adirondack Park," endorses the proposal in its September/October issue. The Enterprise says the Swap is a "good deal" because it "enhances the Forest Preserve and serves a public good." "And on top of that," its editorial states, "we get the economic benefit of strengthening a company that employs one hundred with a payroll of $6 million."

Denton Publications, the publisher of six weekly community newspapers in northeastern New York State, says, "There truly appears to be no losers in this proposed deal."

In its September 25 editorial, the Denton Editorial Board says the Swap would benefit: a longtime Adirondack business and the many people who rely on it; local governments, which will see an increase in property tax revenue; and the Adirondack Forest Preserve, which will grow with the addition of 1,500 acres of recreational lands. "There are few major employers in the Adirondack Park," the Board writes, "and we must do everything we can to support them."

If Proposition 5 is approved by voters statewide on November 5, New York State will temporarily swap a 200-acre parcel of little-used state Forest Preserve land in the Town of Lewis, Essex County, to a 60-year-old Adirondack business, NYCO Minerals, that operates a wollastonite mine on the property next door. Wollastonite is a white, non-metallic mineral that is used in a wide variety of consumer and industrial products. NYCO is a major Adirondack Region employer, with 100 employees and an annual payroll of $6 million. The company is also a major taxpayer in the region, and supports a wide variety of not-for-profit community organizations through philanthropic gifts and the volunteer services of its employees. Acquiring the adjoining property will enable NYCO to extend the life of its Adirondack operations and 100 jobs by eight to 10 years.

In return for the 200-acre parcel, NYCO will give New York State 1,500 acres of forestland that will be added to the Forest Preserve and opened for public recreation. These lands are rich in hiking, fishing and other recreational opportunities and provide improved access to the Jay Mountain Wilderness Area near Lake Placid.

Rounding out the Swap, when NYCO has completed its work on the adjoining property, the company will reclaim and replant the land and donate it back to New York State. The 1,500 acres will remain in state ownership.

Because the Swap involves land located within the constitutionally protected Forest Preserve, it requires a constitutional amendment that must be approved twice by the New York State Legislature and then by voters statewide. The Legislature has approved the Swap twice in bipartisan votes leading up to the November 5 statewide referendum. The Swap is also supported by a broad cross-section of local governments, business groups and environmental advocates.

More information on Proposition 5 - The Adirondack Land Swap - can be found at www.adirondacklandswap.com and www.facebook.com/landswap.