1st Lt. Kayla Freeman named "2019 Veteran of the Year" by the West/Central Alabama chapter of the Association of the U.S. Army 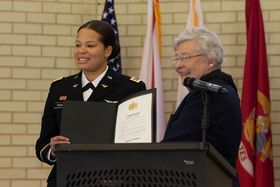 MONTGOMERY, AL (02/27/2020) (readMedia)-- Alabama National Guardsman 1st Lt. Kayla Freeman was named "2019 Veteran of the Year" by the West/Central Alabama chapter of the Association of the U.S. Army during their annual Women's Leadership Awards Luncheon in Tuscaloosa Wednesday. Feb. 26, 2020. Freeman, who in 2018 became the Alabama Army National Guard's first black female pilot, recently returned from an overseas deployment where she flew more than 250 accident and incident-free combat flight hours.

Freeman said her career success has been the product of a very simple formula. "It means hard work pays off," she said. "I'm an aerospace engineer-I've got an equation for everything-so for me, success equals faith in God plus hard work plus perseverance." She said making her place in history was never a goal, but that it was simply a job she wanted. "I'm just an average girl from a small town with big dreams," she said. "And I really love what I do."