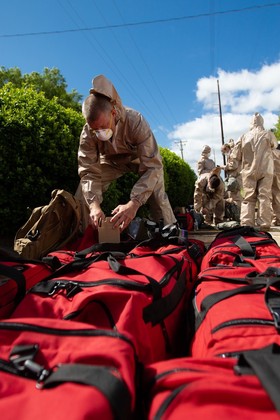 MONTGOMERY, AL (04/19/2020) (readMedia)-- The Alabama National Guard conducted it's first disinfection operation at the Bill Nichols State Veterans Home in Alexander City, Saturday, April 18, 2020. Soldiers and Airmen from the newly formed TF 31 arrived on site at approximately 10 a.m. and immediately began disinfecting designated areas in the facility. Each team is composed of approximately 14 Soldiers and Airmen, and are specially equipped with personal protective equipment to enable the Soldiers and Airmen to safely conduct disinfection operations. Residents were moved by the facility staff to isolated protected areas prior to operations commencing.

"The Alabama National Guard is here to serve our citizens, and I'm glad Governor Ivey asked us to take on this important mission," said Maj. Gen. Sheryl Gordon, adjutant general of the Alabama National Guard. "Our specially trained Soldiers and Airmen are prepared to assist our communities as we fight the spread of COVID-19 together."

This operation is just the first in a series of long-term care facility disinfection missions that will take place over the coming weeks throughout the state.