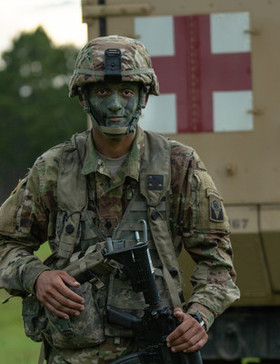 MONTGOMERY, AL (08/29/2019) (readMedia)-- CAMP SHELBY, Miss. - It was late and Spc. Micah Turnbull, senior combat medic for B Company, 1-167th Infantry Battalion, began his assessment on yet another heat exhaustion patient in the scorching summer heat.

He had been ensuring all his Soldiers drank water and knew to rest if the heat was getting the better of them, but at 10 p.m., long after sunset, the worst of the day was long past. Still, he had to tend to every Soldier that came to him with the same diligence, so he took notes while checking vitals of his latest patient.

An elevated heart rate is normal during the physical exertion of infantry missions.

Within normal limits for the activity.

That can't be right.

He checked it again.

"I immediately knew something had to be really, really wrong," Turnbull said.

"He looked fine while I was assessing him," he said. "He was alert and oriented and responsive to questioning. The only thing he could tell me was that he 'felt weak.'

"Then, all of a sudden, he rolls over and the whole look on his face had changed. It was instant. He had gone from the normal Soldier I knew to someone who looked scared.

"He was glazed over, pale... you could see fear in his eyes. You could feel it."

At internal temperatures above 106 degrees, Lopez said, the human body's proteins begin to break down and seizures become commonplace, which brings its own set of complications to the safety of internal organs. As temperatures continue to rise, temporary and permanent brain damage become huge concerns. At 108º, morbidity and mortality rates skyrocket.

Just as suddenly, Turnbull said, that fear turned to aggression as the patient became combative, trying to flee the field ambulance and avoid treatment. Turnbull said he and his partner held him down, while another Soldier tried to restrain him, restraints he quickly broke free from.

"We had a chest of ice we had been using for drinks, so we pulled a sheet off our shelf and dunked it in the ice chest, then wrapped it around him to start cooling him off. I told someone to jump in the front of the truck and start driving to the battalion aid station (BAS)."

With Soldiers still holding the patient down, the ambulance pulled into the BAS where Lopez and a team of battalion medics met them.

"When I first saw him," Lopez said, "it was a grim outlook. And I think everyone there knew it. But everybody compartmentalized those reactions and went to work. We had a job to do no matter how things looked."

The BAS holds more equipment and capabilities than line medics carry, but Lopez said he knew the situation was out of their league and the patient needed immediate hospital care. "I didn't want him here any longer than 3-5 minutes," he said.

As they called to request aerial medevac, the team went to work on more interventions for the fading patient.

His constricted veins coupled with his continued resistance made the already difficult task of IV access a monumental ordeal.

They discarded the needle and prepped another.

"On the third try," Turnbull said, "I finally got the stick and we started running fluids in him along with 50 mg of diphenhydramine to help him relax. Then," he continued, "he started seizing."

They packed him with more ice sheets in his axillary (armpit) and inguinal (groin) areas, and started moving him to Charlie Med, the Role 2 provider where the helicopter would land to receive him.

But, Turnbull said, it was as if everything that could go wrong did and his bleak condition became even worse.

En route, the patient began to vomit. Turnbull immediately tilted the litter to its side so gravity could carry the emesis out of his airway, but the patient's teeth were clenched so tightly, the team couldn't get suction through to help.

"We pulled up to Charlie Med," Turnbull said, "and I realized I'd never seen anybody like that before. There was a straight line across his neck and everything above was purple or blue. His eyes were protruding out of his head.

"I honestly thought he was going to die."

But, for the first time that night, Spc. Turnbull was wrong.

According to Lopez's documentation, it was less than 25 minutes from the time the Soldier told Turnbull he "felt weak" to the time he was in the air.

"In medicine," Lopez said, "time is everything. I credit his survival with the speed of the interventions and medevac. It's only due to those medics' actions that he's now home and alive and well.

"With core temps of 108 degrees or higher," he continued, "he had about a 50/50 chance of survival and an even greater chance of permanent brain or organ injury. He was literally being cooked from the inside. Without the kind of fast, accurate care he got, he wouldn't have stood a chance.

"You don't get any closer to death than he did and still live."

The following days, Turnbull said, he couldn't keep his mind on much else without the help of his fellow medics who helped reassure one another of their actions. A few days later, he finally received a phone call from the patient that put him back at ease.

"The moment I heard his voice on the phone," Turnbull said, pausing with emotion, "there's no better feeling. I couldn't stop smiling."

Turnbull and Lopez both credited the quick, measured response to Guard members' unique ability to bring civilian experience into the military setting. Turnbull works full time as an Advanced EMT at Regional Paramedical Services (RPS) in Pell City, and Lopez is a full-time orthopedic surgery PA, a discipline in which hyperthermia remains one of the primary life threats and providers are heavily trained on identification, prevention and response.

"Everyone has outside skills they bring to the table," Lopez said, "and that variety makes us, I think, more effective than our active duty counterparts."

"It's a combination of everything," Turnbull added. "It's learning multiple things from multiple people and having the ability to tie it all together for one goal-to save someone's life-to be able to take these lessons from different parts of medicine and bring it together when you need it is an incredible advantage."

Kyle McDonnell, deputy director of operations for RPS, agreed, adding he wasn't at all surprised to hear about Turnbull's success.

"It's definitely a two-way street," he said. "We benefit from them as much as they benefit from us. We hire as many Guardsmen as we can because they have that experience and they have that discipline and that calmness in stressful situations that takes civilian guys years to get."

He said EMTs and paramedics like Turnbull running emergency calls will see situations on an almost weekly basis that may be just as life-threatening and learning to handle that in one uniform only makes them better in another.

"When somebody only sees the same scenarios in training, he's going to have a much harder time than the guy exposed to that virtually every week. The treatment's mostly the same and the goal is the same-to save a life-so the muscle memory and ability to act under pressure is extremely important."

Turnbull admitted that, although he'd run similarly extreme emergency calls in his civilian job, this experience hit harder than he expected.

"The different thing is: on the civilian side, it's a bunch of people I don't know," he said.

"But here, when you're eating, sleeping, showering, and training in the same place with the same people for three years, they become family and they mean a lot more to you on a personal level. It's more rewarding, to serve them, but at the same time, it definitely would have hurt a lot more if he hadn't made it.

"I would have been completely devastated."

That closeness, he added, was also another factor in his success, however.

"I can't take all the credit," Turnbull said.

While he was the first medic and the lead for the duration of the incident, he emphasized the team effort. "The reason he's alive is because of everybody; not just me. We were all together, we were all with him, we all loaded and unloaded."

Turnbull's life-saving achievement (which Lopez said he could only describe as "miraculous") was capped by the recognition and personal coin from Lt. Gen. Thomas James, Jr., commanding general of First Army, who visited the 1-167th Infantry's annual training shortly after the event.

Turnbull said that praise was humbling, but a much greater moment came a week after when he completed his naturalization process and received his long-awaited U.S. citizenship.

Born in Australia, he has lived in Alabama since childhood and been enlisted for more than five years, but, he said, a hiccup in his paperwork postponed his lifelong dream. Now that he's finally received it, the only thing he felt was "excitement."

"This is my home," he said. "Everybody I love is here. I still have family back there, but there's nowhere in the world I'd rather be.

"This country is full of people who are go-getters. They inspire me to be everything I can be and live life to the fullest and I've always wanted to be as much a part of that as I can."