How the AL National Guard protects the citizens of Alabama 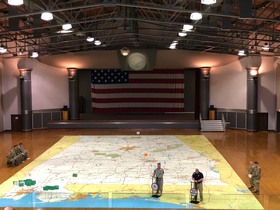 "Sunday, the Soldiers of the Alabama Army National Guard Joint Task Force Tarpon conducted a rehearsal of concept exercise in order to ensure that the units that will provide the initial response understand their role in providing support to the citizens of the affected areas," said 226th Maneuver Enhancement Brigade commander Col. Brian Naugher. "In addition to this, we educate the local civilian leaders of how we will prepare and execute the initial response to a catastrophic event on the Gulf Coast," said Naugher. "It is imperative that we establish the relationships before an event in order to mitigate the impact on the affected citizens. I hope that we never have to respond, but know that we are ready."

The hurricane ROC drill starts with the hurricane seven days from making landfall and advances until the notional storm makes landfall. This allows the Alabama National Guard leadership and key unit personnel, using an 80 foot by 50 foot map of Alabama, to visually walk through all the missions and tasks they may have during a hurricane response. The ROC drill also helps the Guard synchronize plans with our Alabama Emergency Management partners for a seamless hurricane response. This drill is one of the many ways that the Alabama National Guard trains throughout the year to be prepared to protect the citizens of Alabama when needed and sets the stage for the Alabama Guard hurricane exercise that will be conducted in May. The goal of the ROC drill is to assure Gov. Ivey and Maj. Gen. Sheryl Gordon, adjutant general of the Alabama National Guard, and all Alabama citizens that the Guard stands ready to respond and provide immediate assistance during a hurricane.