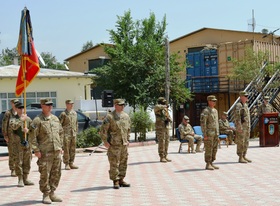 KABUL, AFGHANISTAN (08/29/2012)(readMedia)-- The 1/167th Infantry, which carries the lineage and honors of the Fourth Alabama reaching back to the Civil War, formally took control of a vital security force mission during a ceremony at Camp Eggers in the Afghanistan capital Wednesday, in a transfer of authority (TOA) ceremony.

Lt. Col. J.R. Bass, commander of the 1/167th and Task Force Centurion, said the Soldiers of the Fourth Alabama have been preparing nearly two years for this deployment and are ready to take this mission from Task Force Roc.

"Our soldiers were well prepared for this day due to the sacrifice of our families which allowed intensive training. We also received tremendous support from our leadership at all levels back home to ensure our success," Bass said. "Motivation is high across our formation as we begin the operational phase of our mission. Our battalion will perform a wide range of vital security duties which will allow for training of the Afghan Forces that will protect this country in the future."

Prior to the TOA, the soldiers in the seven companies that make up Task Force Centurion conducted a "right seat ride" for several days with their Task Force Roc counterparts to learn about the areas in which they are operating and the lessons learned in conducting the missions. Once that was complete, the companies held their own TOA ceremonies leading up to the Task Force TOA.

Although the Task Force Centurion soldiers are spread throughout Afghanistan and working directly with other commanders, the 167th's command sergeant major, Command Sgt. Maj. John Black, said the Fourth Alabama leadership intends to maintain a watchful eye on all of its Soldiers.

"These soldiers have been building a long time for this moment and I am proud of them," Black said. "I equal their heart and spirit to the soldiers of World War II."

Both Bass and Black gave high praise to Task Force Roc for making the transition an easy one. Black praised the professionalism of the Ohio National Guard Soldiers and Bass said the departing unit has "set Task Force Centurion up for success."

The transfer of authority now means the soldiers of Task Force Roc can begin making their way back to Ohio to their loved ones.

The mission now fully belongs to Task Force Centurion until it is replaced by another unit sometime in the late spring or early summer of 2013.

This deployment in support of Operation Enduring Freedom is the latest war-time campaign in the unit's proud and decorated history.

The 167th Infantry traces its roots to the Civil War when it was part of the Fourth Alabama Infantry Regiment. It has played a role in nearly every major war and campaign since, including a legendary stint in France during World War I. This is the first time the entire battalion has deployed in the current war.

MEDIA: If you need to request more information or schedule an interview, contact Maj. Mike Tomberlin, Task Force Centurion's public affairs officer (PAO), at michael.s.tomberlin@afghan.swa.army.mil. Keep in mind, there is a 9 and one-half hour time difference between Alabama and Afghanistan.

TOA 1: Lt. Col. Craig Baker and Command Sgt. Maj. Thomas Watson stand in front of the unfurled colors of the 1/134th Field Artillery while Lt. Col. J.R. Bass and Command Sgt. Maj. John Black stand in front of the encased colors of the 1/167th Infantry at a ceremony at Camp Eggers in Kabul, Afghanistan Wednesday. The Ohio Army National Guard's 1/134th encased its colors, symbolizing the end of its mission as Task Force Roc while the 1/67th uncased its colors symbolizing the transfer of authority to the Alabama Army National Guard battalion, which will operate in Afghanistan as Task Force Centurion.

TOA 9: Lt. Col. J.R. Bass (left) and Command Sgt. Maj. John Black unfurl the colors with the many campaign streamers of the 1/167th Infantry at a ceremony at Camp Eggers in Kabul, Afghanistan, Wednesday. The historic Fourth Alabama has nearly 600 Soldiers in Afghanistan operating as Task Force Centurion.