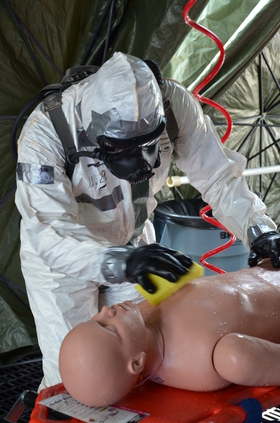 MONTGOMERY, AL (07/12/2012)(readMedia)-- Alabama National Guard members will make history next month. Members of the Alabama National Guard will travel by convoy August 5 and 6 to participate in a major field training exercise - Vibrant Response 13. The convoy is the largest domestic convoy in Alabama National Guard history with approximately 500 vehicles and 1,500 Alabama Guardsmen traveling through Alabama, Tennessee, Kentucky and Indiana on its way to Camp Atterbury, Ind.

Guardsmen throughout Alabama are already conducting preventive maintenance checks and services on equipment and hundreds of vehicles to ensure a smooth ride during the more than 500 mile trip.

The 31st Chemical Biological Radiological Nuclear (CBRN) Brigade, based in Tuscaloosa, Ala., has the overall responsibility for coordination and logistics of the convoy. "We are in close contact with highway officials in all four states" said Capt. Charles B. Priest, a 31st CBRN Brigade logistics officer. "Our goal is to arrive safe with minimal disruption." The 31st has been working with law enforcement in all four states for coordination and assistance during the two-day trip.

The convoying personnel will bivouac overnight at White House High School, White House, Tenn., on their way to Camp Atterbury. "The school administrative staff is to be complimented for their willingness and cooperation. This is a very nice facility and we appreciate their efforts" said Priest.

Vibrant Response is a joint exercise with more than 9,000 Soldiers, Marines, Airmen and Department of Defense Civilians. The training event is intended to exercise the ability to deploy, employ and sustain specialized military response forces upon the request of civilian authorities to save lives and relieve human suffering following a catastrophic CBRN incident.

The Alabama National Guard will serve as the National Guard's first Command and Control CBRN Response Element (C2CRE) for a two-year mission beginning this fall, taking on a role that has up to now only been filled by the active duty military. The C2CRE is a key part of the DOD's transformation of the nation's tiered CBRN response enterprise. The C2CRE, along with other units are CBRN response forces designed to provide search and rescue, decontamination, medical, aviation, communications and logistical support.

The Alabama Guard's C2CRE will be returning via convoy in mid-August.

C2CRE-CPX: Soldiers from the 31st CBRN Brigade perform preventive maintenance checks and services on communication equipment during a command post exercise, June 4-8, 2012, in Northport, Ala. They are preparing for the August 5 and 6 convoy to Camp Atterbury, Ind., in order to participate in the Vibrant Response 13 exercise (Photo by Staff Sgt. Sandra D. Lucas, 131st Mobile Public Affairs Detachment).