Local Chesterfield resident shares her experience with lung cancer, to raise awareness about the disease, importance of lung cancer research 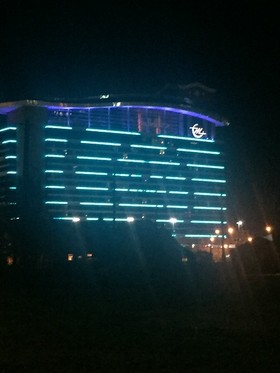 DETROIT MI (05/08/2018) (readMedia)-- The American Lung Association and its LUNG FORCE initiative is turning Detroit turquoise during National Women's Lung Health Week (May 6-12) in support of those whose lives have been impacted by lung cancer.

Landmarks and communities across the nation, including the Motor City Casino & Hotel, Ally Detroit Center, One Campus Martius Building, the Federal Reserve, One Woodward and ZLot Parking in Detroit were illuminated last night in turquoise, the signature color of LUNG FORCE.

"Lung cancer has been in the shadows for far too long. When you think of cancers affecting women, most people don't initially think of lung cancer, yet it's the leading cancer killer of both women and men," said American Lung Association in Michigan's Executive Director Maureen Rovas. "We're raising awareness about lung cancer through LUNG FORCE and during National Women's Lung Health Week, and are proud to stand with those facing the disease."

In Michigan an estimated 8,780 women and men combined will be diagnosed with lung cancer this year alone. Yet according to the Lung Health Barometer, only 3 percent of women consider lung cancer a top-of-mind health concern. The American Lung Association's LUNG FORCE initiative – nationally presented by CVS Health – is seeking to change this.

On Tuesday (May 8) LUNG FORCE cookies and pins were given to all members of the Michigan House of Representative and Senate. The legislature was expected to approve a resolution naming this week as Women's Health Week and State Representative Julie Calley is scheduled to speak on the floor of the House about LUNG FORCE and Turquoise Takeover.

During National Women's Lung Health Week, the Lung Association is highlighting the experiences of LUNG FORCE Heroes, those whose lives have been impacted by lung cancer, including local Chesterfield resident. Cheryl Hauler, whose parents both had lung cancer.

"After losing my Dad to lung cancer, my mom was diagnosed 20 years later, and I decided that we needed better results. I was older and more aware. We took a more proactive approach, and I'm happy to say my mom is an 18-year survivor . . . I am determined to be a factor in more people's success stories," she said.

In mid-March, Hauler joined LUNG FORCE Heroes from across the country in Washington DC, visiting the offices of Michigan's legislators so share the message about lung cancer.

"I've been honored to know Cheryl Hauler. Through hearing her story, and other stories like hers, we can better understand the impact lung cancer has on so many lives and realize the urgent need to take action," said American Lung Association in Michigan's Director of Advocacy Ken Fletcher, who accompanied her in Washington. "Together, we are working to advocate for and fund lung cancer research, so that we can develop new treatment options and better methods of early detection."

From May 6 - 26, CVS Pharmacy customers can make a donation of $1, $3 or more at the register to raise funds for lung cancer awareness, research and education. The in-store fundraising campaign is part of Be The First, a 5-year $50 million initiative funded through CVS Health and the CVS Health Foundation to help deliver the nation's first tobacco-free generation. Customers can also visit Lung.org/cvs for easy ways to help their communities become tobacco-free and access discounts on quit smoking resources. In addition, CVS Pharmacy will donate $1 for every pack of Extra Gum that is purchased, up to $100,000 to the American Lung Association's LUNG FORCE.