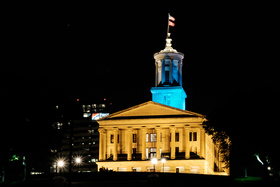 NASHVILLE TN (05/08/2018) (readMedia)-- The American Lung Association and its LUNG FORCE initiative is turning Nashville turquoise during National Women's Lung Health Week (May 6-12) in support of those whose lives have been impacted by lung cancer.

"Lung cancer has been in the shadows for far too long. When you think of cancers affecting women, most people don't initially think of lung cancer, yet it's the leading cancer killer of both women and men," said American Lung Association in Tennessee's Executive Director Gail Bost. "We're raising awareness about lung cancer through LUNG FORCE and during National Women's Lung Health Week, and are proud to stand with those facing the disease."

In Tennessee an estimated 6,030 women and men combined will be diagnosed with lung cancer this year alone. Yet according to the Lung Health Barometer, only 3 percent of women consider lung cancer a top-of-mind health concern. The American Lung Association's LUNG FORCE initiative – nationally presented by CVS Health – is seeking to change this.

During National Women's Lung Health Week, the Lung Association is highlighting the experiences of LUNG FORCE Heroes, those whose lives have been impacted by lung cancer, including local resident Kathy Leiser.

"When my doctor told me that I had a stage 1 lung tumor, I decided to do whatever was necessary to rid myself of the cancer – I scheduled my surgery for three weeks out. I now am on multiple medications daily and experience significant shortness of breath. It affects my life daily, but I soldier on," said Leiser.

Leiser was fortunate that her lung cancer was caught early through a lung CT scan. Most are not that lucky.

"A lung CT scan saved my life before I had symptoms of disease. I feel unbelievably fortunate to have found my cancer so early," she said.

In mid-March, Leiser joined LUNG FORCE Heroes from across the country in Washington DC, visiting the offices of Tennessee's legislators so share the message about lung cancer.

"I've been honored to know Kathy Leiser and to highlight her powerful voice. Through hearing her story, and other stories like hers, we can better understand the impact lung cancer has on so many lives and realize the urgent need to take action," said Bost, who accompanied her in Washington. "Together, we are working to advocate for and fund lung cancer research, so that we can develop new treatment options and better methods of early detection."

From May 6 - 26, CVS Pharmacy customers can make a donation of $1, $3 or more at the register to raise funds for lung cancer awareness, research and education. The in-store fundraising campaign is part of Be The First, a 5-year $50 million initiative funded through CVS Health and the CVS Health Foundation to help deliver the nation's first tobacco-free generation. Customers can also visit Lung.org/cvs for easy ways to help their communities become tobacco-free and access discounts on quit smoking resources. In addition, CVS Pharmacy will donate $1 for every pack of Extra Gum that is purchased, up to $100,000 to the American Lung Association's LUNG FORCE.