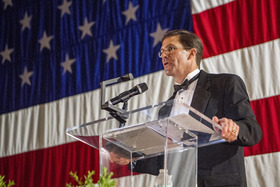 This was not his first visit to the DCNG Armory. After spending a decade as an active duty, Army officer, Esper served in both the Guard and Army Reserve. Of note, he served in the D.C. Army National Guard as a major.

"I am here this evening not only as the 23rd Secretary of the Army, I am also here as a Capital Guardian," Esper said. "I proudly served in the Mobilization Augmentation Detachment 4 prior to and following the September 11th attacks."

Esper spoke to the 750 attendees about his military service and his experiences as the Secretary of the Army. From those experiences, he explained what he gathered regarding the strength and character of the Nation, its service members and their families.

Esper mentioned that during his Guard and Reserve service, he understood the value of diversity through the variety of occupations, skillsets and experiences within the ranks, and the significance of the Citizen Soldier to the total Army.

"I stand before you as a product, of my experience, of service in all three components," Esper said. "It shaped me as I am sure it has shaped all of you."

"In my time, I have witnessed the transformation of the Guard from a strategic reserve, to an operational reserve, to now an integral component of the operational force," Esper said.

This year's ball coincides with the D.C. National Guard's 216th birthday. In 1801, the Seventh Congress, authorized the President to organize a militia of the District of Columbia, appoint its officers and call it to service in the same manner as state governors or executives. The law was approved May 3, 1802 with President Thomas Jefferson personally selecting the first officers of the unit.

In his speech, Esper recognized the DCNG, its contributions and its participation in every major conflict since 1802.

"Your mission, to protect the capital and defend the nation, as important as it was then, it is even more important today." Esper said. "Many of you know too well, having lived and worked in the District on that tragic day in September nearly 17 years ago. The world has become a far more dangerous place since then. We face threats, both known and unknown, from foes whose capabilities and desires to increase their global influence-to undermine our way of life and to harm us-continues to grow."

The ball's theme was, "Readiness then and now, remembering DCNG WWI veterans." This theme served to recognize the D.C. National Guard's First Separate Battalion, one of the segregated units that served in France as the U.S. Army's 372nd Infantry Regiment that was seconded to the French 157th, "Red Hand," Infantry Division. The unit fought in the Meuse Argonne Offensive in October 1918 and was credited with the re-taking of Monthois from German forces. For their actions, the 372nd received the regimental citation for the Croix de Guerre. In September 1982, the D.C. Army National Guard's 171st Military Police Battalion was re-designated as the 372nd Military Police Battalion. The "Red Hand" is displayed on the unit's crest to honor the First Separate Battalion's service in WWI.

In his speech, Esper recognized the 372nd's story and mentioned that its spirit endures today as the DCNG continues to embody the same level of readiness and commitment.

"The transformation from a strategic reserve to operational force is due to you, Soldiers, Airmen and family alike" Esper said. "This is a result of your hard work, dedication and selfless service: just like the veterans, of World War I, who we honor today."

The evening also included the recognition of three retired DCARNG officers and their honorary promotions in the D.C. Militia.

During social hour, attendees were serenaded by selections from the U.S. Air Force's Strolling Strings. The official portion of the ball began with the entrance of the official party through a rifle corridor formed by members of the U.S. Coast Guard Honor Guard. During dinner, the "Capital Sound" ensemble of the DCARNG's 257th Army Band performed musical selections.