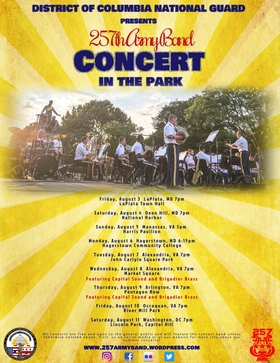 WASHINGTON, DC (08/08/2018) (readMedia)-- The Band of the Nation's Capital: the District of Columbia National Guard's 257th Army Band, will conduct concerts, Aug. 8-11, at venues across the National Capital Region.

The concert series is a program of classics from almost every musical genre. The dates and locations of the concerts are listed below. All concerts have free admission and are open to the general public. Performances will include the DoD award-winning Brigadier Brass ensemble and vocal soloist Sergeant Vicki Golding.

The 257th Army Band, "The Band of the Nation's Capital" is comprised of citizen soldier musicians of the DC National Guard. Historically, it provided musical support for an Inaugural Ball for President Barack Obama, the burial of the Unknown Solider in 1921, the state funeral of Presidents Harding and Kennedy and overseas missions to Greece, Panama, the U.S. Virgin Islands, and Jamaica. The Band has also given performances at The Great American Brass Band Festival, throughout the National Capital Region, and across the nation.