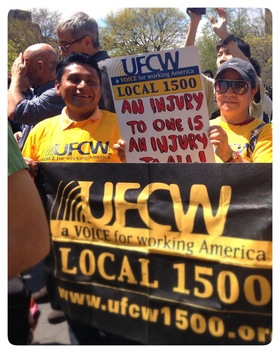 Fired workers from Mrs. Green's Natural Market in Mt. Kisco, rally in NYC on May Day

The gourmet "natural" market, Mrs. Green's, recently announced its plans to open their first New York City store in Manhattan's West Village, touting its natural, "amazing local organic products" would be a perfect fit with the "progressive foodies" of the West Village.

UFCW Local 1500 stated that Mrs. Green's characterization of the West Village overlooks a key attribute, "New York City communities, especially the West Village, aren't just progressive foodies, they're progressive communities," said Union President Bruce W. Both, "They will not stand for a company that abolishes rights from its workers, and will demand more than natural, local products from company that has a track record of violating their workers' rights," said Union President Bruce W. Both.

Mrs. Green's Natural Market was federally charged in 2013 with violating its workers rights and intimidating workers during a union election at its Mt. Kisco store. The charges were settled in November and Mrs. Green's agreed to create an intimidation free work environment for their employees. Two months later in January 2014, Mrs. Green's Natural Market fired 9 longtime employees who supported the union, after some met with local elected officials on their federally protected rights, which include organizing a union. Some employees had been working with the company for over a decade, and a majority of them had been employed for over six years.

Since the firings workers have been on a picket line in front of the Mt. Kisco store, and have received an outpour of support from the Mt. Kisco community, including local New York State Assembly Members David Buchwald and Shelly Mayer. Federal charges have been filed against the company and a response from the National Labor Relations Board is expected very shortly.

On May Day, the International Day for Workers, the illegally fired workers from Mrs. Green's Natural Market in Mt. Kisco will be joining hundreds of workers throughout Manhattan at numerous rallies, marches and actions, to educate the public, politicians and the West Village community on how Mrs. Green's treats and views its workers.

"We're excited to get the support from workers across New York," said David Ramirez, a former Mrs. Green's worker for over 10 years, who was fired in January, "When they hear what happened to us, they tell us to stay strong and we are with you, it's very powerful and emotional to hear that," Ramirez said. UFCW Local 1500 is calling for the fired workers to be put back to work.

For more on the campaign visit: http://www.ufcw1500.org/organize/mrs-greens-is-mean