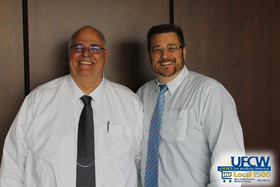 Speelman, who began his career as a Local 1500 member as a part-timer at Dairy Barn on Long Island, has fought for decades to help working men and women attain better lives at work and at home with their families. He has long held irresponsible corporations accountable throughout the New York tri-state region, fighting for better rights and wages for Walmart and Target workers. He has repeatedly fought to raise the standards for all workers because he deeply believes all men and women deserve the right to improve their lives.

"I am honored to represent the proud men and women of UFCW Local 1500, a union I first became a member of when I was 17 years old, " Speelman said. "We will work together to provide a better life for all Local 1500 members, to provide better benefits, and safer working conditions," Speelman said. "We will make it a priority to secure better part-time scheduling, so our members can better balance a family life."

The Local 1500 Executive Board unanimously elected Speelman and Newell on May 11, 2016. He becomes the seventh president of New York's largest grocery workers union. Speelmanbegan his career working part-time for Dairy Barn stores on Long Island while attending college in the 1970's. He quickly became an instrumental part of the UFCW Local 1500 membership, fighting for better wages and benefits for his coworkers and their families. At a young age, he served on three contract negotiation teams, leading to win contracts with better wages, benefits and hours for his coworkers. Speelman then joined the UFCW Local 1500 staff in 1986, serving in every union department before becoming Secretary-Treasurer in 2009.

"Our team will bring in a big energy change," Speelman noted. "We're eager to and look forward to working alongside community groups, other unions, and our International Union. We are in this together, and only together can we make a significant impact on helping the hundreds of thousands of men and women working throughout New York. Our team will have a dedicated focus on organizing new stores and helping working women and men better their lives in the food retail industry."

Robert Newell began his career in 1990 working as a part-time shopping cart attendant for Pathmark in Bayshore, NY. Newell was instrumental in working to organize Wild by Nature, an organic chain of stores throughout Long Island in the 1990's. Prior to becoming Secretary-Treasurer, Newell was previously Assistant to the President of UFCW Local 1500."I want this union to become an even greater and stronger union for the decades ahead," Newell said, "Our new team will truly make a positive impact on the lives of working men and women throughout New York."

"It's a neat story," Speelman explained, "I started as a part-timer working nights, Rob started pushing carts as a teenager. It's because of our passion and love for the men and women in this union that we're here today. We couldn't be more proud and honored to lead Local 1500 to become bigger and better."

We are over 22,000 workers standing together to build an economy that every hard-working family in New York deserves.