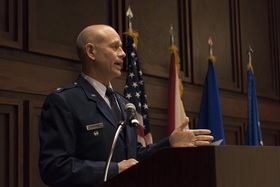 Alabama's Tuskegee Airmen heritage will be on display at a ceremony promoting Col. William Sparrow to the rank of Brigadier General in the Alabama Air National Guard this Friday.

Sparrow, former commander of the 187th Fighter Wing "Red Tails" at Dannelly Field in Montgomery, Ala., will be honored during the public ceremony at 1:00pm Friday, October 4, 2019 at the Tuskegee Airmen National Historic Site in Tuskegee, Ala.

In addition to the official promotion, Marla Andrews, the daughter of Tuskegee Airman Capt. Lawrence Dickson, will present a cross found at her father's crash site to the Tuskegee historic site's museum. Capt. Dickson, a fighter pilot with the 100th Fighter Squadron during World War II, was declared missing in action in December 1944 after the engine of his P-51D Mustang failed while returning from an aerial reconnaissance mission. His remains were recovered in Italy in 2017.