Over 350 volunteers remind New Yorkers they can vote early, absentee or on Election Day for the June primaries; Deadline to request absentee ballot is TOMORROW 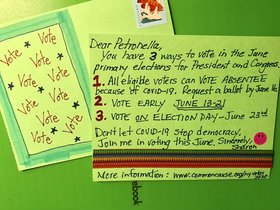 NEW YORK, NY (06/15/2020) (readMedia)-- For over three weeks, over 350 Common Cause/NY volunteers have sent 13,000+ postcards to New York voters reminding them they have three ways to vote this June: early, absentee or on Election Day. Voters in six districts including Suffolk County, Central Brooklyn, the Bronx, Cortland, Westchester and Rockland counties received postcards. Attached are photos of some of the postcards.

Absentee voting has correctly received much attention, but voters with disabilities, those who require translation services and anyone else can also vote in-person safely and securely.

The three ways to vote are:

"Amid the COVID-19 pandemic, voters need to know there are three ways to vote this June: early, absentee and on Election Day. Many campaigns are promoting absentee voting, but not alerting voters that they can also vote in-person. New Yorkers need to know all of their options, so they can get out the safe vote!" said Susan Lerner, Executive Director of Common Cause/NY.

Currently, New York State has a very narrow set of reasons as to why voters can request an absentee ballot and vote absentee. Governor Cuomo temporarily expanded those reasons to include anyone who is concerned over the spread of an illness during a state of emergency for the June primary. Senator Biaggi has introduced a bill expanding those qualifications to include the general election and beyond.

In January 2019, New York joined 37 other states to establish Early Voting, giving voters nine days ahead of Election Day to cast their ballots. Common Cause/NY was among one of the leading voices calling for reform in New York. Now Common Cause/NY is also calling on the state Legislature to double the days of early voting and expand early voting hours and locations to disperse in-person voters. Other states, like Washington, give voters 18 days to cast their ballots early. With more time to vote and additional poll sites, voters will have more opportunities to cast their ballot safely.