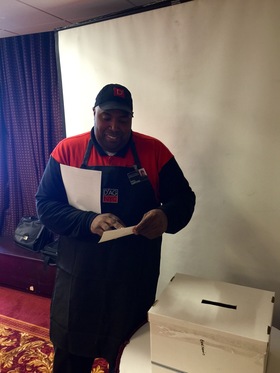 WESTBURY, NY (05/04/2015)(readMedia)-- D'Agostino workers throughout New York unanimously ratified a new three-year contract. The agreement will provide five raises over the next three years to nearly 1,000 men and women working at D'Agostino's 13 stores. "I'm very proud of this new contract," said D'Agostino negotiating committee member Jasmine Dalton, "We got the raises that we deserve, maintained our benefits and increased the guaranteed hours for more part-time workers. It's a win," Dalton concluded.

The agreement significantly expanded the amount of part-time workers who receive a guaranteed minimum 20-hour workweek, a key benefit for retail jobs. "This is huge for us," said Terry Quinones, lead negotiator for United Food and Commercial Workers (UFCW) Local 1500, "Retail scheduling is usually sporadic, making it difficult to balance a personal life and schedule. Now, even more part-timers can have an ease of mind knowing they have a minimum set number of hours each week. This is going to help hundreds of our families," Quinones said.

The previous contract between United Food and Commercial Workers (UFCW) Local 1500, New York's largest grocery workers union, and D'Agostino Supermarket expired over a year ago. Since then the union and company have been on monthly contract extensions. The two sides reached a tentative agreement on April 23rd. Voting took place at multiple locations in the New York City metro area on April 30, 2015. The contract maintains all health and welfare benefits, and protects all members of UFCW Local 1500 from any discrimination because of: race, color religion, age, sex, sexual orientation, disability, national origin, genetic information or gender identity or expression.