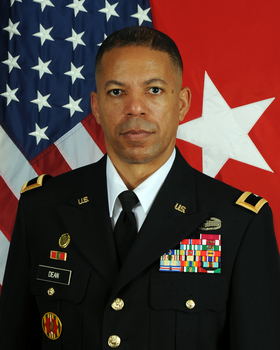 "Every promotion in the military matters because it represents the added trust and responsibility given to an individual," said Brig. Gen. William J. Walker, acting commanding general, D.C. National Guard. "Col. Dean has been the 'go-to' person for this command, and he has never let the command down."

In addition to being the MAC commander, Dean acting commander of the D.C. Army National Guard Land Component Command, and the District of Columbia Joint Task Force commander for domestic operations. In these positions, he is responsible for the strategic leadership and operational employment of units assigned and attached to the D.C. Army National Guard. Major units of the DCARNG include the 372nd Military Police Battalion, 547th Transportation Company, 104th Maintenance Company and Army Aviation Support Facility. Comprising of both full-time and part-time (traditional) personnel, the DCARNG trains to fulfill federal combat taskings as well as supports the District during National Special Security Events and natural disasters.

Before the reading of the promotion order, Dean was awarded the Legion of Merit.

Dean began his military career by enlisting in the Washington National Guard. He was commissioned after receiving his Bachelor of Arts in criminal justice from Washington State University. He would later join the D.C. Army National Guard as a traditional officer before being selected for the Active Guard Reserve program.

"It is a tough transition going from a traditional soldier to the AGR program because of what is asked of you," Dean said. "We are expected to do everything a normal-sized unit would do, but with less than half the people."

Dean is a career Military Police officer, strategic leader and operational planner. As a member of the DCARNG, he has served as the commander of the 372nd Military Police Battalion, 74th Troop Command and the deputy J3 for the Armed Forces Inauguration Committee. In 2005, he deployed to Iraq with the 372nd Headquarters and Headquarters Detachment. He has also served within the DCARNG and Joint Force Headquarters operations directorates to include being the director of military support. Prior to his current assignments, he was as the DCARNG chief of staff.

"There is no way I could've made it here today, on my own," Dean said. "It took everyone supporting this organization, and each other-and me being a part of it-that got me here."

Dean holds a Master of Public Administration degree from Troy State University and a Master of Science in National Security Strategy from the National Defense University. He is also a graduate of the Combined Arms Services School and the Command and General Staff College.

In addition to the Legion of Merit, Dean's significant awards and decorations include the Bronze Star Medal, the Meritorious Service Medal with two oak leaf clusters, the Joint Service Commendation Medal, the Iraq Campaign Medal, the Kuwait Liberation medal and the Combat Action Badge.

Prior to becoming a full-time D.C. National Guard member, Dean was the director of enrollment and benefits department for Blue Cross and Blue Shield of the National Capital Area. He is also the finance chair on a local public charter school board in Washington, D.C.

"This is the era of new ideas, but they are your ideas," Dean said. "I work for you, so let's work together and get after it."