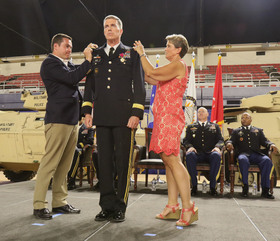 WASHINGTON, DC (06/19/2018) (readMedia)-- In a series of ceremonies filled with tradition and history, the District of Columbia Army National Guard's Land Component Command welcomed its new leaders on June 10, at the D.C. National Guard Armory.

"We don't go out and get leaders; we make them," said Maj. Gen. William J. Walker, commanding general, D.C. National Guard, who officiated the change of command and change of responsibility ceremonies. "These four gentlemen represent the gold standard of competence and character," Walker said of the generals and senior noncommissioned officers sharing the stage with him.

The ceremony began with Ryan's promotion to brigadier general. After the reading of the promotion order, Ryan's wife, Tammy Ryan, and son, Patrick Ryan assisted in placing the brigadier general shoulder boards on his service coat. This was followed by Ryan being administered the U.S. uniformed services oath of office by Walker. Ryan's promotion ceremony also included the presentation of his general officer's belt, pistol and unfurling of his one-star personal flag.

Dean, who assumed leadership of the LCC in 2017, said he was very proud of the efforts his Soldiers made to improve the organization's mission readiness in key areas. He also mentioned that the DCARNG ranks second among the 54 National Guard states and territories in the percentage of Soldiers who have professional training in their military specialties and has increased the numbers of Soldiers who are ready to deploy in support of state and federal missions.

Dean considered his time in command a success because of the Soldier's ability to focus consistently and improve in an ever-changing environment.

"You are going to be driven hard by Brig. Gen. Ryan; I have no doubt about that," Dean said. "But I have confidence in each Solider in this command. I am proud of each of you and so proud to have been your commander."

Ryan's remarks were dedicated to both his support team, who enable him to rise through the ranks to general officer, and to the Soldiers of his new command. He reminded his Soldiers that the vision of the D.C. National Guard is to remain an elite organization committed to excellence.

"This is an organization built of great character instilled through the total Army professional values, the Soldiers Creed, the Warrior Ethos and the Army Song," Ryan said. "As incoming commander, I could not ask for a more trained organization than the one Brig. Gen. Dean and Command Sgt. Maj. Brooks prepared for Command Sgt. Maj. Smith and myself."

Reflecting on his tenure as the LCC's top enlisted leader, Brooks shared that success was never about him.

"I had the title but it was about the team," Brooks said. "It will always be about the team and the Soldiers who accomplish the mission."

Stepping into his role as the command sergeant major of the LCC, Smith thanked his predecessor for setting the standard and establishing a strong foundation.