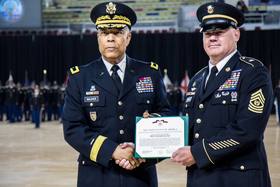 The assumption of responsibility was part of the D.C. National Guard's 2017 Awards and Decorations Ceremony.

As the senior enlisted leader, Brooks becomes the principle advisor to the Commanding General of the D.C. National Guard in all facets of the organization's operations with special emphasis on enlisted matters.

"He [Brooks] is a magnificent warrior who has worn the cloth of the United States for more than 24 years," said Brig. Gen. William J. Walker, D.C. National Guard acting commanding general. "He is a combat veteran, well-decorated and extremely deserving of this recognition and opportunity."

Before assuming responsibility, Brooks was awarded the Legion of Merit for his actions as the Command Sgt. Maj. for the D.C. Army National Guard, Land Component Command from 2013-2017. During Brook's tenure, he advised three general officers and served as the Joint Task Force-District of Columbia, Command Sgt. Maj. during the 58th Presidential Inauguration.

A native of Ormond Beach, Fla., Brooks began his military career in 1993 by enlisting in the U.S. Army as an infantryman. His active duty assignments include tours with the 82nd Airborne Division, Eighth U.S. Army's Noncommissioned Officer Academy, XVIII Airborne Corps and the Third U.S. Infantry Regiment. As a member of The Old Guard, Brooks served as a squad leader and joint services casket team leader. He also participated in the burial of unidentified Americans killed in the September 11, 2001, Pentagon attack.

"During my military career, I've had the opportunity to work with and lead some of the nation's finest men and women," Brooks said. "Our Soldiers and Airmen today are the future of this nation. As leaders, we need to understand that our Soldier's and Airmen's questions are not challenges to our authority. We only need to take the time and listen to what they have to say. They just may have the best idea you've ever heard and one that could change the face of the nation."

"NCOs make things happen," Brooks said. "We are given a plan, whether it is an operations or training plan or strategic guidance, and we take that plan and turn it into action. That is the role of a noncommissioned officer. That is what I expect."

"I will only ask one thing of you: Be better today than you were yesterday," Brooks said. "And tomorrow, be better than you are today, and I guarantee you we will take this organization to the next level."

Staff Sgt. Michael F. Brooks (right) as the leader of the joint services casket team during his assignment with the Third U.S. Infantry Regiment. During this time, he participated in the burial of unidentified Americans killed in the September 11, 2001, Pentagon attack. (Courtesy Photo)