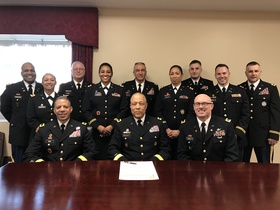 The purpose of the reception was to celebrate 2018 as the year of the warrant officer.

During the reception, the master of ceremonies provided a history on the warrant officer corps which included significant milestones of the cohort. This included:

• 2009: The DCNG's 257th Army Band, conducted by Chief Warrant Officer 3 Shelia Klotz, being the first National Guard band to play the ruffles and flourishes and, "Hail to the Chief" for the commander in chief

• 2014: The creation of the Army staff Senior Warrant Officer position

This was followed by speeches from warrant officers, representing different branches, describing their roles and importance to the DCNG mission.

Jewett followed the warrant officers to thank attendees, recognize distinguished guests and provide insight on the state of the Army's warrant officer corps. He discussed the cohort's accomplishments, challenges and outlook for the future. Of note he recognized the importance and contributions of the Army's sergeant majors.

"The sergeant majors are instrumental to the success of the warrant officer cohort," Jewett said. "Don't think for a minute that we don't need you. It is all about you and how you build, develop and train the noncommissioned officer corps to become potential warrant officers."

Jewett also spoke to the instances in history where the Army considered either reducing or eliminating the warrant officer ranks; and in each instance, it was discovered that the Army could not do without warrant officers.

Brig. Gen. Aaron R. Dean II, adjutant general, DCNG mentioned that, in the past, there might have been some confusion about the role of warrant officers. However, he believes that clarity is one of the great attributes warrant officer possess due to their role as the technical experts in their respective fields.

"If I want to know something, I want to go to the expert who knows," Dean said. "On the officer side, we are generalists, allowed to somewhat specialize in our branches, but not nearly to the degree that warrant officers do."

Dean also pointed out that because the warrant officer is relatively new at 100 years old, the potential challenge is the way ahead sandwiched between the officer and noncommissioned officer corps that have clearly defined roles. In light of this, he reminded the attendees that the Army is still in the people business.

"Systems deal with people; every branch and career field deals with people; and that's the part you can't get away from," Dean said. "It does not matter how many machines, systems or forms of artificial intelligence you have, people are still going to be affected by what you do. The question you should ask yourself is, as the technical experts, how does knowing this tie into where you want to go in the future?"

Dean also recognized the warrant officer cohort as a tight-knit group, and their ability to work together. He mentioned that although they may joke about which branch is the best, they know that as a team they can't do it alone.

"You are a cohort that communicates up and down the line to coach and mentor one another," Dean said. "I think that both the officer and NCO corps can learn something from that."

Callaway also received the DCNG Command Chief Warrant Officer's coin from Jewett. Afterwards, Dean made reference to Brig. Gen. Walker's initiative for the DCNG to be ranked first in every positive metric. And in this metric, he could report that the DCNG was, "number one."

The evening's final remarks came from Brig. Gen. William J. Walker, acting commanding general, DCNG. He began his remarks by imagining what the National Guard and the U.S. Army did without warrant officers until 1918. Walker mentioned that in his 38 years of service he could still recall the first warrant officers he met when he first joined as a member of the Illinois National Guard.

"Every place I've gone, a warrant officer has influenced me; sat down with me," Walker said. "There may be some challenges, but not in my mind because you lead people, programs and policies. You are experts in everything you do."

"You have overwhelming comprehensive, dominating knowledge and because of that you are liberated, bold and decisive," Walker said. "Because you are certain about something, you are unshakable."

The reception ended with the presentation of the signed proclamation by Walker. The proclamation reads as follows:

Whereas, the warrant officer is integral to the armed forces, as well as the District of Columbia National Guard which has been protecting the capital and defending the nation since 1802. We honor the warrant officer for the, "Century of Service" to this great nation.

Whereas, the 100 year anniversary of the United States Army Warrant Officer (1918-2018) is a time to reflect and celebrate the great triumphs and positive impacts of service for the past 100 years.

Whereas, the warrant officer expands the capability of the armed forces and the District of Columbia National Guard with their specialized critical skills which are sustained at the highest level of technical and tactical proficiency.

Whereas, the District of Columbia National Guard is proud of those great men and women who have served as warrant officers and their continued commitment to excellence and selfless service to the citizens of the United States, near and abroad.

Therefore, be it resolved, I, Brigadier General William J. Walker, Acting Commanding General, District of Columbia National Guard, do hereby proclaim 2018 as the, "Year of the Warrant Officer" in the District of Columbia National Guard. I encourage all personnel to recognize their achievements, impacts and significant contributions across the armed forces; and seek a greater awareness of the warrant officer's competencies and employment; and to assist in the identification and development of future warrant officer professionals to strengthen and advance the cohort."