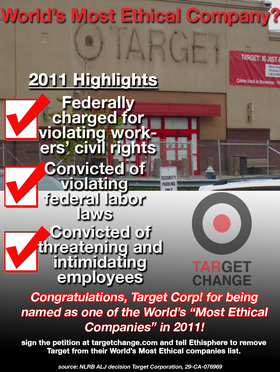 "In 2011 the federal government charged Target with violating federal labor laws and its employees' rights," said Pat Purcell, Assistant to the President UFCW Local 1500. "Target's failure to mention or even acknowledge the need for change in their annual Corporate Responsibility report exposes a serious disconnect with their employees, ignorance of the seriousness of the charges against them and an overall inability to recognize reality." Target's 61-page report primarily focuses on philanthropy and sustainability goals, while failing to set goals focusing on becoming a better employer. "It would be admirable if Target set goals focusing on bettering the lives and workplace conditions for the hardworking men and women who make their company a huge success and following the laws of the United States. Honesty with shareholders, consumers and employees should be an important benchmark for corporations like Target."

On Target receiving the honor of one of the World's Most Ethical Companies in 2011 Purcell said, "Despite being a well recognized think-tank, Ethisphere clearly gave no thought when picking Target as one of the world's most ethical companies. Target is not even the most ethical company in Valley Stream Long Island, let alone the rest of the world. We urge Ethisphere to reconsider their decision and meet with Target employees and reconsider this poor choice. Ethisphere must either raise the bar or risk their annual report becoming an annual joke," Purcell concluded.