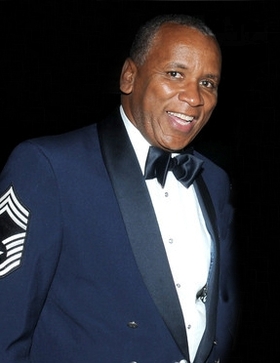 Chief Martin, who serves as the D.C. National Guard State Equal Employment Manager, has long been known for getting results. As a third party in disagreements and employment disputes of all kinds, you might say he's an expert at making lemonade from lemons.

And the list of folks who have worked with him is long. In addition to being the equal employment manager, Martin serves as the Joint Force Headquarters Sexual Assault Response Coordinator, Alternate Dispute Resolution Manager, Violence in the Workplace Manager, and Employee Assistance Manager. Whew! Not only does he hold a lengthy list of titles and the duties, he is sought after by units throughout the nation in assisting with the resolution of difficult disputes.

"Chris has been--and continues to be--an invaluable member of our team," said Maj. Gen. Errol R. Schwartz, DCNG Commanding General. "Disputes and disagreements are inevitable in the workplace, especially one as large as the National Guard. Getting them resolved at the lowest level is challenging, but it helps create a work environment that is fair and safe. Chris is undoubtedly one of the best in the nation at what he does, and this award is more than deserving."

As a result of his efforts, the National Guard has led all Federal agencies in mediation for the last 2 years. To date, he has mediated 146 disputes in 17 different states.

The award was presented for outstanding accomplishments in human relations, equal opportunity, and civil rights at the Defense Department Forum and Awards Program in Kansas City, Mo. It was presented to individuals representing all the components of the DoD. Chief Martin represented the National Guard along with Maj. Eurydice Stanley of the Army National Guard in Washington, D.C., and Sheirl McCormick of the North Carolina national Guard.

Time and time again, the late Maj. Gen. David F. Wherley, former Commanding General of the D.C. National Guard, would praise Chief Martin for being central in the settlement of difficult disputes and disagreements. Wherley and his wife, Ann, were killed in the D.C. Metrorail accident last year.

The key to Martin's ability to take the emotion out of volatile situations and concentrate on communication--or the miscommunication--that must be worked through. He will continue to be a key part of keeping the mission of the D.C. National Guard rolling, and will continue to spread his wealth of knowledge around the nation.