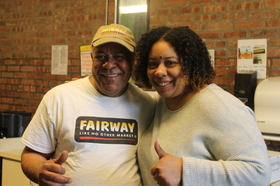 The contract, which marks the first between Fairway's new CEO, Jack Murphy, and UFCW Local 1500, New York State's largest grocery workers union, covers over 2,400 workers at Fairway Market's 15 locations. "Our team was dedicated from the start to not only protect our contract, but to set a tone for future negotiations," said lead union negotiator Rob Newell, "Because of our solidarity in the stores, along with the drive and passion from our negotiating committee, we were able gain positive changes that secure stability and the livelihoods for 2,400 men and women and their families."

The term of the Agreement is March 30, 2015 through April 1, 2018. Fairway workers will receive six raises throughout the term, including a retroactive wage increase from March 30th 2015. All Pension and Welfare benefits will remain intact and unchanged.

The contract also includes a number of quality of life issues such as increasing the number of minimum workweek hours for all workers. All workers, regardless of class or tenure, are guaranteed to be scheduled a minimum 21 hour workweek. "A majority of us have been with Fairway for at least 10-years, it's a family here," said John Graham, a union negotiating committee member who works at Fairway in Paramus, "So increasing the minimum hours for everyone, regardless of how long you've worked here, is huge for us. It gives us all stability that will help our families."

A minor but very impactful change was switching when vacation time was paid. Vacations are now paid prior to taking vacation, as opposed to receiving the pay the week of vacation. The agreement also includes a successors clause and increases contributions to the Union scholarship fund. Additionally it protects all members of UFCW Local 1500 from any discrimination because of: race, color religion, age, sex, sexual orientation, disability, national origin, genetic information or gender identity or expression.