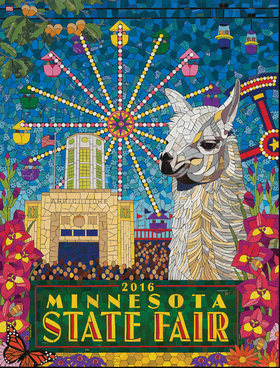 ST. PAUL, MINN. (06/09/2016)(readMedia)-- The Minnesota State Fair's 2016 Commemorative Art was unveiled this evening at 5 p.m. by Minneapolis artist Michael Sweere (pronounced SWEER-ee). Surrounded by State Fair enthusiasts on the State Fairgrounds, he presented his artwork publicly for the very first time. The original piece will be on display in the Fine Arts Center during the 2016 Great Minnesota Get-Together, Aug. 25 through Labor Day, Sept. 5, and can be viewed online at mnstatefair.org/art.

Sweere is a mosaic artist who primarily uses recycled and salvaged materials. His colorful mosaic interpretation of the Minnesota State Fair was created entirely from paper packaging, much of which was collected during Sweere's visit to the 2015 Minnesota State Fair. Every piece was hand-cut from a cardboard package that had been a promotional item at the fair or previously contained food, beverages or a wide range of household consumables. The individual pieces of cardboard were glued in place on a masonite panel to form the artwork's key image of "Lucky" the llama surrounded by iconic State Fair imagery.

Sweere attended Mankato Technical Institute and received a degree in commercial and technical art. After graduating, he moved to Minneapolis and spent the next 20 years working as an art director, illustrator and graphic designer for numerous advertising agencies. In 2005, he left the commercial field to pursue fine arts and formed The Michael Sweere Mosaic Company, LLC. His commissioned artwork installations can be found in numerous corporate, private and public collections, including airports, educational institutions and health care facilities throughout the United States. He was recently chosen to be one of 34 Minnesota artists to create work for U.S. Bank Stadium, future home of the Minnesota Vikings. He is represented by Rosalux Gallery in Minneapolis, Sivertson Gallery in Grand Marais and Abode Gallery in Stockholm, Wisc. Visit michaelsweeremosaic.com for more information.

The commemorative poster, a limited number of signed prints and other merchandise featuring the art are available for purchase at msffoundation.org. Proceeds support the Minnesota State Fair Foundation 501(c)(3) mission to preserve and improve the historic State Fairgrounds and support State Fair educational programs.