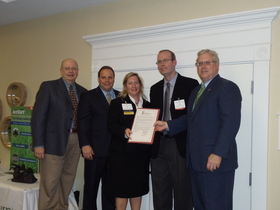 ALBANY, NY (10/28/2011)(readMedia)-- The New York Aviation Management Association (NYAMA) celebrated its 35th anniversary as the "Voice of Aviation in New York," advocating on behalf of airports and the aviation industry throughout the State. The group hosted its annual conference in Watkins Glen that not only brought together industry leaders but a number of elected state officials whose remarks underscored the vital economic role played by New York's airports.

NYAMA President Carl Beardsley stated, "These elected officials recognize the enormous role played by aviation, not only through creating jobs in their district but giving their region access to a global economy. We appreciate their support and their ongoing commitment to providing a regulatory environment that encourages aviation businesses to grow and prosper. Their role with the New York State Legislative Aviation Caucus has made them particularly effective in strengthening the economic role of our airports and aviation industry."

Some $50 billion is generated by aviation activities in New York State, employing nearly 400,000 New Yorkers and producing $18 billion in payroll according to a recent economic report released by New York State Department of Transportation.

"New York State's aviation industry has an enormously positive economic impact across the statewide economy -- upstate and downstate, east to west and north to south, the industry is one undeniably bright spot on New York's economic landscape," said Senator Thomas O'Mara (Big Flats). "The bottom line on the economic impact of our aviation industry is positive, hopeful, and strong. It's clear that aviation deserves to play a central role in guiding the development of New York's badly needed pro-business, pro-industry, pro-economic growth, pro-job creation strategy."

"The recent conference to celebrate the steady growth and success of New York's aviation industry over the past three decades couldn't have been more timely," said Assemblyman Phil Palmesano (Corning). "The state's regional economic development councils are hard at work developing plans and strategies for future economic growth and the aviation industry has earned a prominent place on this stage. We would be smart to take actions and encourage policies to strengthen an industry that already provides hundreds of thousands of jobs and generates billions of dollars in payroll."

The special reception was an opportunity to recognize these and other state officials for their strong support of the airports and aviation industries. The annual conference allows for members and aviation professionals to interact while being briefed on the latest information on state and federal efforts including the Airport Improvement Program (AIP), aviation security and sustainable operations that protect the environment.

NYAMA focuses its efforts on behalf of aviation tax reform while promoting the benefits of the general aviation industry to the general public, particularly its focus on jobs, economic opportunity and bringing global markets to regional airports. Beardsley observed that general aviation advocacy is increasingly falling on the shoulders of individual aviation business leaders at a time when few outside of airports truly appreciate the potential economic power of this crucial sector.

WHY: Recognizing the importance of aviation to economic and community development.