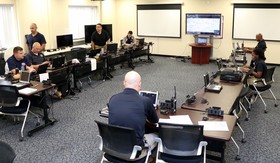 Nationals Park rumbled with thunderous applause and fanatic attendees cheered with excitement as the 2018 MLB All-Star game got underway. Attendees, who were not already, were asked to stand. A quiet still replaced the cheering. Honor replaced excitement. The national anthem played and the colors of the nation were presented.

While most everyone stood, there were some who didn't. Some sat. They didn't sit in protest or to advocate any cause. They are advocates of protecting the lives, freedoms and liberties of those gathered to watch the all-stars play.

The District of Columbia National Guard's 33rd Civil Support Team, along with Delaware's 31st CST, sat in response trucks and operations centers located throughout D.C. ready to respond to chemical, biological, radiological and nuclear attacks. The CST isn't staffed by minor league troops; they are all-stars.

Air Force Senior Master Sgt. Mike Hester, first sergeant, 33rd CST, D.C. National Guard, was one of the founding members of the team during its 2005 inception.

"This is my second tour on this team and it has grown," Hester said. "Each member is prepared, qualified and committed to the job of securing the D.C. area."

The 33rd CST's composition makes it uniquely qualified to assess, advice, and assist D.C. Fire and Emergency Medical Services, the FBI and other local and federal partners, when responding to CBRN threats. The team's members make it equipped to respond to the full spectrum CBRN threats with individuals focused on all levels of threat assessment from administrative and operational tasks to doctors and nuclear medical scientists.

The 33rd CST is the only D.C. National Guard unit whose members are all active guard reserve and on call 24/7 to respond to the needs of local and federal partners. The CST is called upon regularly to support large re-occurring events in D.C. such as the presidential inauguration, State of the Union Address, July 4th celebrations and other regularly scheduled large-scale events.

The team provides as needed support to local and federal agencies during non-regularly scheduled large scale events such as the March for Our Lives, Rev. Billy Graham's funeral and the Washington Capital's Stanley Cup parade.

Army Staff Sgt. Rayshod Thompson, administrative noncommissioned officer, 33rd CST, D.C. National Guard, was on duty for the 2014 U.S.-Africa Leaders' Summit in Washington, when the FBI called upon Thompson and his teammate.

"We got the call from the Joint Hazard Assessment Team and headed to the U.N. building," Thompson said. "The report was for a suspicious package with no return address. We'd trained for this before so we knew what to do."

The team and FBI cordoned off the area and went inside to examine the package.

Thompson put on his hazardous material suit and placed the package inside the "glove bag" which allows the package to be opened and assessed without surrounding areas being exposed to its contents.

Once the contents of the box were exposed safely, Thompson used specialized equipment to identify the materials.

"It turned out that the box was filled with seasonings and butter," Thompson said. "The seasonings had mixed and looked like a powdery substance and the butter was part melted."

While the contents turned out to be harmless, the process by which the CST and partners addressed the possibly hazardous material proved to be effective. The CST is well prepared for instances when materials may indeed be hazardous.

Among CSTs, the 33rd, due to the high volume of large-scale events that take place in D.C., is on mission more regularly in addition to maintaining an intense training schedule with full-team and equipment training occurring about six times per year.

"We do a lot when people don't even see us," Hester said. "There is a lot of sacrifice that goes into doing this job, but it's a part of why we like to do it."

As fans stood to honor the anthem and enjoy the all-stars play, the D.C. National Guard's 33rd CST, sat in trucks and operations centers around D.C. ready to be called upon, like a relief pitcher in the bullpen; all-stars.