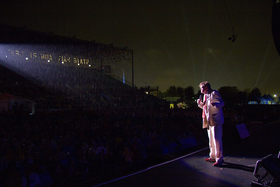 The Minnesota Show with Garrison Keillor

Tickets will be available through Etix at etix.com or by calling (800) 514-3849. In addition, tickets may be purchased at the State Fairgrounds Ticket Office during a special limited-time opening from 10 a.m. to 1 p.m. on Friday, June 3. For additional State Fair ticket information, call (651) 288-4427.

Additional Grandstand artists will be announced soon. State fair fans and music enthusiasts are encouraged to sign up for the State Fair's e-news at mnstatefair.org to receive concert announcements before tickets go on sale.

About The Minnesota Show with Garrison Keillor:

Minnesota native and humorist Garrison Keillor returns to the Minnesota State Fair with a special broadcast performance entitled "The Minnesota Show." The two-hour program will feature comedy, songs, Guy Noir, Private Eye, the News from Lake Wobegon and a 10,000-Voice Choir. Tim Russell, the man of a thousand (and one) voices, the "seriously silly" Sue Scott, and sound effects guy Fred Newman will be on hand along with pianist Richard Dworsky, Prairie Home Grandstand Band and special musical guests. The Minnesota Show will be recorded live from the Grandstand and then broadcast the following evening on Minnesota Public Radio. Keillor has been host of the radio variety show A Prairie Home Companion since 1969. He will host his final Twin Cities broadcast of A Prairie Home Companion on May 21 from Minneapolis' State Theatre and then head out on a six-city tour. Keillor will step down after the show's final season broadcast on July 2 at the Hollywood Bowl.

Charlie Wilson is an R&B singer, songwriter and producer. Born in Tulsa, Okla., he got his start with his brothers Robert and Ronnie as the lead singer of The Gap Band. With 15 Top Ten R&B hits like "Outstanding," "You Dropped A Bomb On Me," and "Yearning For Your Love," the group was one of the most popular funk bands of the '70s and '80s. Wilson's first solo album Bridging the Gap garnered his first No. 1 Billboard Urban Adult Contemporary single "Without You." The 2005 album Charlie, Last Name Wilson, featured R. Kelly, Justin Timberlake and will.i.am as producers and was certified gold. Other hits since then include "There Goes My Baby" and "You Are." Wilson, a nine-time Grammy Award nominee and an important influencer to many artists today, has collaborated with Snoop Dogg, Kanye West, Rihanna, Beyoncé, Common and more. His latest album Forever Charlie features the singles "Goodnight Kisses" and "Touched By An Angel."

Grammy Award-winning R&B singer, songwriter and actress Fantasia Barrino rose to fame as the third-season winner of American Idol. Her first single "I Believe" opened at No. 1 on the Billboard Hot 100, and her debut album Free Yourself was certified Platinum and received three Grammy Award nominations. Her follow-up album Fantasia featured the singles "Hood Boy," "When I See U" and "Only One U." Fantasia's 2007 role in the Broadway musical The Color Purple received rave reviews. Said to be influenced by soul singers Aretha Franklin, Patti LaBelle and Tina Turner and singing lyrics of love, pain and resilience, her latest album The Definition Of... will be released this summer.