After being federally charged by a NLRB Regional Director with unlawfully terminating 8 employees in January 2014 for "supporting a union," the Union has settled with Mrs. Green's, after agreeing to rehire workers with back-pay 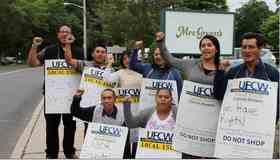 WESTBURY, NY (07/17/2014)(readMedia)-- United Food and Commercial Workers (UFCW) Union Local 1500 announced it has assisted eight unlawfully fired workers from Mrs. Green's in getting their jobs back with back-pay, after a Regional Director of the National Labor Relations Board charged Mrs. Green's Natural Market with unlawfully terminating them because "they supported the Union."

"Mrs. Green's did everything possible to avoid unionization, including firing eight longtime workers who gave a combined over 50 years of service to the company," said UFCW Local 1500 President Bruce W. Both. "We joined the brave workers, along with the Mt. Kisco community, on a picket line in January, fighting for what we all deserve, respect at work, and today justice prevailed."

The settlement between the union and company comes days before a NLRB hearing in which Mrs. Green's faced federal charges for unlawfully threatening and intimidating workers, and ultimately firing workers who supported Local 1500.

"Our fight has been long, but it is not over," said David Ramirez, an unlawfully fired worker who worked at Mrs. Green's for nearly 10 years, "We ultimately want and need protection at work, so we and all our coworkers don't have to work in fear that if we ever stand up for our basic rights, we will be fired and on a picket line for 6 months, fighting for what we all should be guaranteed at work. Nobody in this country deserves that."

Union President Bruce W. Both, noted that, although the settlement has put workers back to work, their struggle is far from over. "In November 2013, Mrs. Green's agreed to cease their anti-union conduct, promising to provide a safe, intimidation-free work environment for the workers. We all witnessed how Mrs. Green's took that responsibility; they illegally fired eight loyal longtime workers and put them on the streets during a frigid winter, fighting for their jobs back. Now, we're here, 6-months later, and nothing has changed; the workers are still fighting for the protection on the job they need, want and deserve."

For months, the Union urged the company to reinstate all unlawfully fired workers and to spare the workers and community the expense and strain of a hearing. The evidence that Mrs. Green's acted in violation of the law was overwhelming and the NLRB Regional Director found that these workers were not fired for their job performance but simply for standing up for their basic rights at work. The Union also extended their appreciation to the Mt. Kisco community along with the politicians who stood with the unlawfully fired workers during their struggle.

"This wasn't easy," said Yesica Mendez, one of the unlawfully terminated workers, "We've been on a picket line since January and the community has stood on the frigid picket line with us during the winter, as we fought back for our rights. 6-months later and days before our federal hearing, the company has finally agreed to put us back to work and settled our case with the NLRB. This is a direct result of the community supporting of us!"

When asked about returning to work, Ramirez said, "We're happy to return to serve the community that stood with us during our struggle. We want respect, protection and security at work once we return."