Planned Parenthood Stands with Women on the 40th Anniversary of Roe

Advocates for Continued Access to Safe and Legal Abortion 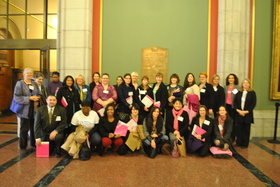 UHPP activists were among the hundreds who came to Albany on January 14 this year to promote the Women's Equality Act including firmer protections for abortion access.

ALBANY, NY (01/18/2013)(readMedia)-- "To protect their health and the health of their families, women must have access to safe, legal abortion services without interference from politicians." – Chelly Hegan, UHPP President/CEO

(Albany, New York) On the 40th anniversary of Roe v. Wade, Upper Hudson Planned Parenthood stands with women across the country in reinforcing the importance of safe and legal abortion. Despite a woman's constitutional right to make her own personal medical decisions without interference from politicians, access to safe and legal abortion is still at risk.

"As a leading women's health care provider and advocate in the greater Capital Region of New York State, Upper Hudson Planned Parenthood understands that abortion is a deeply personal and often complex decision for a woman to consider if and when she needs it," said Chelly Hegan, UHPP President/CEO. "A woman should have accurate information about all her options around her pregnancy. To protect their health and the health of their families, women must have access to safe, legal abortion services without interference from politicians, as protected by the highest court."

In 1965, illegal abortions made up nearly one-fifth of all pregnancy-and childbirth-related deaths. In the 40 years since Roe v. Wade blocked states from banning abortion, it has been one of the safest medical procedures - today, less than 0.3 percent of women undergoing legal abortions sustain a serious complication. Despite abortion being legal, constitutionally protected, and consistently supported by a majority of Americans, opponents of women's health have made it increasingly harder for women to access it. In states such as Texas, South Dakota, Florida, and Michigan, some politicians have eroded access to safe and legal abortion through court battles, ballot measures, and burdensome legislative restrictions.

"A majority of Americans oppose efforts to overturn Roe v. Wade, and in November they voted to protect a woman's ability to make her own personal medical decision without interference from politicians," said Hegan. "Legislators who continue to interfere with a woman's access to safe and legal abortion do so against the will of their constituents."

• According to a 2012 Gallup poll, 77 percent of Americans think abortion should be legal in some or all circumstances.

• According to a post-election poll from the Pew Research Center, 64 percent of voters younger than 30 said that abortion should be legal in all or most cases.

• According to a Gallup poll of voters in 12 swing states, 39 percent of women cited abortion as the most important election issue for women. Women who cited abortion preferred Obama by a 3-1 margin.

• According to research from the National Latina Institute for Reproductive Health, nearly three-quarters (74 percent) of Latino registered voters support a woman's ability to make personal, private decisions about abortion.

• According to a 2012 survey from the Public Religion Research Institute, two-thirds (67 percent) of African Americans believe that abortion should be legal in all or most cases.