Women's Health Advocates Gather at Event to Celebrate the 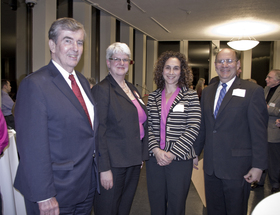 ALBANY, NY (01/25/2013)(readMedia)-- Over 100 public officials, legislators, clergy and women's health advocates gathered at the Corning Tower Observation Deck, Empire State Plaza, in Albany this evening to celebrate the 40th Anniversary of the Supreme Court Decision, Roe v Wade; to honor local Rabbi and Director of the statewide organization, Concerned Clergy for Choice, Dennis Ross, with the UHPP Advocate for Choice award; and to launch a Capital Region campaign to pass the Women's Equality Act.

Several speakers at the event remarked on the unprecedented level of attacks on Planned Parenthood and women's health at the state and national level over the last two years.

"Deciding when and if to start a family is something that women do," said UHPP President/CEO Chelly Hegan in her remarks to those gathered. " I trust women to make decisions that are right for them. And I am puzzled that anyone thinks that a politician is a more suitable moral authority on whether the decisions that women make are right or wrong for her."

Deborah Rozen Zamer, President of the UHPP Board of Directors noted that "this tidal wave of extremism has galvanized those who believe that women should be able to make personal, private decisions about pregnancy and parenthood without government interference. The response to this assault on women and families was demonstrated in the election when in race after race, those who showed disrespect and callous disregard for women were turned out of office and more women than ever before were elected. "

The Women's Equality Act, introduced by Governor Cuomo in his State of the State address, was a major focus of the event. The Act combines ten legislative initiatives and addresses pay equity, domestic violence, human trafficking, several persistent areas of discrimination, and the Reproductive Health Act. Hegan announced that UHPP is part of an "unprecedented coalition of organizations who have come together to pass the Women's Equality Act during this legislative session and invited all those present to get on board the statewide campaign."

"It is time, once again", said Hegan, "for women of all races and religions, all economic circumstances and education levels to stand together and say – we are worth more. New York State is the birthplace and the cradle of Women's Rights, and now it is time to make it the permanent home. With the introduction of The Women's Equality Act, we place a stake in the ground; a stake that will not move and that will hold up the tent of equality for all women."

At the event Rabbi Dennis Ross was presented with the UHPP 2013 Advocate for Choice Award. The award is given annually to individuals and organizations that have demonstrated extraordinary work in the area of reproductive freedom and choice.

Rabbi Ross is the Director for Concerned Clergy for Choice, an interfaith reproductive rights advocacy network of 1000 clergy dedicated to ensuring access to reproductive health services and education. He is a well-respected author and speaker, most recently known for his book, All Politics is Religious. He has been a vibrant and determined leader among those clergy who recognize and advocate for the importance of women's ability to make personal and private decisions about pregnancy and parenthood.

Upon accepting the award, Ross stated, "Concerned Clergy for Choice is a multi-faith network of religious leaders - ministers from a wide spectrum, including Baptist, Episcopal, and Methodist denominations, along with rabbis, and Muslim and Catholic leaders. As we witness the faith-driven, vicious legislative attacks against Roe v. Wade, in Congress and in state Capitols across the land, Concerned Clergy for Choice affirms the moral good in access to birth control and safe and legal abortion. We stand with Upper Hudson Planned Parenthood, Family Planning Advocates of New York State and the Planned Parenthood Federation of America as a forceful counter voice to religious groups working overtime to enshrine their faith restrictions as the law. The 1000 members of Concerned Clergy for Choice affirm that each human being has the personal responsibility to decide who to marry and when to have children, and that politicians and religious leaders have no right to barge in and make personal, private decisions that belong to someone else."